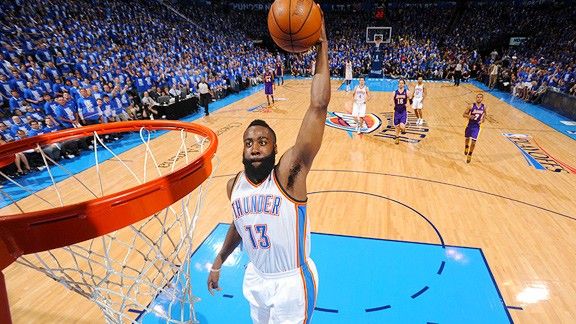 James Harden will be taking it to the rim for a new team this season.

The Houston Rockets will launch one of the NBA's top reserves into a much bigger role this season. The numbers show he has the capability to fill some immediate needs.

Let’s take a closer look at what the Rockets get in obtaining James Harden in a trade with the Oklahoma City Thunder that was completed on Saturday night.

No one better off the bench

Harden was the NBA’s top scorer off the bench last season. He averaged 16.9 points per game as a reserve and won honors as the NBA's Sixth Man of the Year.

When Harden was on the floor during the regular season, the Thunder averaged 106.4 points per 48 minutes, 11 points better than what they averaged with him off the court.

They outscored opponents by an average of nine points when Harden was on the court, and just one point when he wasn’t.

The difference was even more stark in the postseason. Oklahoma City outscored opponents by nearly 10 points per 48 minutes when he played and was outscored by seven points per 48 when he didn’t.

This was true even though Harden’s play suffered significantly in the NBA Finals against the Miami Heat. He shot 38 percent from the field, a drop-off of 7 percentage points from how he fared in the first three rounds.

James Harden In Isolation
Based on Video Review (2011-12)

Video review of Harden’s scoring last season showed that he was one of six players in the NBA to average more than one point per play when in an isolation situation (minimum 50 plays).

The chart on the right shows his effectiveness in such situations.

He will be joining a Rockets team whose players ranked 20th in the league in isolation-situation performance.

Harden also shot 65 percent from inside 5 feet last season, the seventh-highest shooting percentage in the league from that distance for a guard (minimum 100 shots)