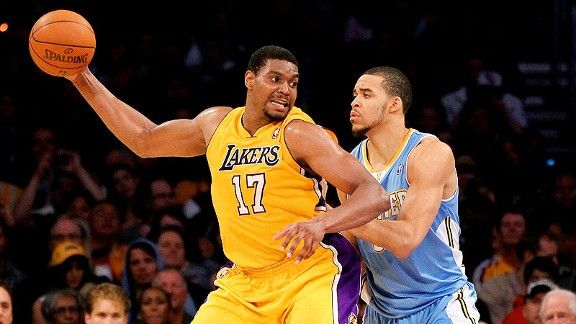 Andrew Bynum (left) was traded to the 76ers in the offseason.This is the third installment of a series called “Missed or Not Missed?”. The concept is simple -- we take a look at a few Western Conference teams and determine if the players they’ve lost will be missed or if the player they brought in will make them forget that loss.

On August 10, the Lakers decided to swap one center for another by bringing in Dwight Howard and shipping Andrew Bynum to the 76ers.

But will Howard help get the Lakers back to the promised land or will they regret letting Bynum go?

Better defender around the basket

Howard has the Defensive Player of the Year awards but Bynum was better at defending non post-up plays around the basket last season.

He gave up the lowest field-goal percentage (35 percent) and third-fewest points per play (.75) among the 93 players with at least 65 plays.

Howard allowed his opponents to shoot nearly 45 percent around the basket and gave up the 34th-most points per play.

When you think about Dwight Howard's various skills, the thought of him being a great passer likely doesn’t immediately come to mind.

Passes to Spot-Up Shooters
From The Post (Last Season)

Howard draws lots of attention and is often double-teamed in the post but proved he can get the ball to the spot-up shooter last season.

Only five players had more than 90 passes to spot-up shooters from the post last year. Howard led the way with 181 such plays. His teammates posted the second-highest points per play (1.09) and field goal percentage (40 percent).

Bynum’s teammates shot below 37 percent and averaged less than a point per play last season.