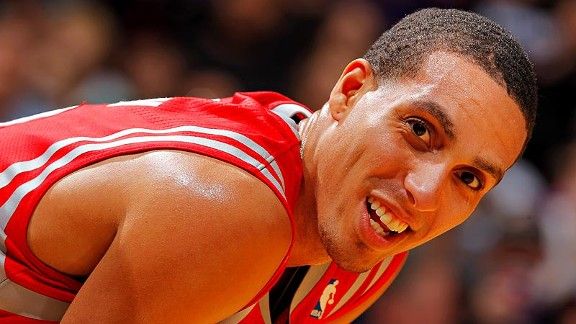 Kevin Martin brings strong offensive credentials to Oklahoma City. Kevin Martin won’t replace James Harden’s beard, but as hyper-efficient scoring guards go, it’s hard to find a player with a better résumé than Martin. As recently as 2010-11, Martin was second to Kobe Bryant in points per minutes played -- and was more efficient than Bryant has ever been.

And it's not because defenses are forgetting about him. Prior to Kyle Lowry a couple of seasons ago, the best player Martin has ever played with before this season is Metta World Peace, back when he was Ron Artest in Sacramento. Yet in Sacramento and then in Houston, Martin managed to score a high volume of points with excellent efficiency -- not quite Harden level, but comparable to Dwyane Wade in terms of effective field goal percentage.

How does he achieve such numbers? We dig into video and stats to take a look:

Kevin Martin has a low, off-kilter release, but he gets it off quickly and it’s accurate as hell. At 6-7, Martin can get the ball off without much room. He is at least Harden’s equal as a floor spacer, and he’s never played with anyone who can draw the defense away from him like Russell Westbrook and Kevin Durant. He should have great opportunities to cash in when the Thunder play the three of them together.

Martin’s quick and low release lends itself to a particularly nasty shot-fake; he only has to flinch and it looks like he's going up. Though he’s not especially creative off the dribble, he has a quick first step and is very good at attacking in straight lines to the rim. And because he remains perfectly balanced throughout his minimalist shot-fake, he can rapidly convert fake to attack. This year, expect to see Martin cruising into the lane as his defender flails in the air behind him.

In 2010-11, Martin ranked as the eighth-best isolation scorer in the league according to Synergy Sports. Off the bounce he has a deceptive crossover that he often uses to get free for a midrange shot and he attacks hard when he has an angle to the rim. His quick release sets up his best isolation play, which comes out of his triple threat/jab step game. The Rockets liked to clear out the left side of the floor early in the possession and give him a chance to go one-on-one, which is something the Thunder should also consider, especially when Martin plays without Westbrook or Durant.

Martin, like Harden, has a certain cynicism in his game in the way he seems to sometimes play for the foul on drives. Martin doesn’t have Harden’s strength when it comes to finishing with contact at the rim, but he’s an excellent free throw shooter and knows how to exploit any advantage by driving his shoulder into his defender to create a foul. Sounds like standard stuff, but since 2006 Martin owns three of the top five seasons in free throws made per 36 minutes.

Martin isn’t especially explosive, but he’s speedy in the open court and runs the floor well. He also makes sharp pass/shoot decisions at full speed and, like Harden, is extremely aggressive attacking the rim and forcing the defense to foul or give up a close-range shot. Another strong point of Martin’s game is running to the 3-point line for transition 3s.

Harden is just about as good as they come as a pick-and-roll scorer, and the Thunder liked to give him a running start at a flat screen in the middle of the court. He was particularly deadly on early drag screens that allowed him to go one-on-one with the helping big man. That’s not really Martin’s bag -- in the past he’s done his best work operating from angles out of the triple threat rather than with a live dribble.

Martin is especially adept at refusing the screen and driving directly to the rim or curling around the screen and escaping for one of his funky floaters.

As a pick-and-roll passer, Martin acquits himself just fine, though he isn’t particularly creative. He knows where his options are on the weak side, and will undoubtedly benefit from the luxury of throwing the ball skyward for Serge Ibaka to finish -- he’s never really played with a good pick-and-roll finisher besides floorboard-bound Luis Scola.

Martin has one of the worst defensive reputations in the NBA, even if his numbers don’t always bear that out. Opposing shooting guards averaged a 12.6 PER against Martin last season and 47 percent effective field goal percentage, both figures below league average, according to 82games.com. To the eye, Martin appears to be a physically unimposing defender who is doomed to be a turnstile on that end. His defensive effort has been widely criticized, but that's likely overblown, and certainly fixable. Also, it won’t hurt that he’ll likely be checking backups. And with Serge Ibaka, Nick Collison and Kendrick Perkins behind him, Martin will be playing with the best defensive frontline of his career.

Still, it’s hard to imagine Martin having the same defensive upside as the 23-year-old Harden, whose combination of barrel chest, quick feet and 6-11 wingspan offered hope he could become a plus defender.

Russell Westbrook came into the league as a shooting guard, but the Thunder were determined he would play point guard and stuck with him at that position despite disastrous short-term results. Westbrook is now the most physically imposing lead guard in the game, and many teams, like the Heat in last season’s finals, choose to defend him with their shooting guard.

Martin’s size will make that adjustment a tough one when he plays alongside Westbrook and Durant on the wings. He’ll often receive the opposition’s third-best wing defender, and if it’s the point guard, odds are Martin will be able to shoot right over him. Martin also showed comfort in the post during the preseason, and could be a threat to punish smaller guards from the block.

While he won’t replace Harden’s individual playmaking, he will absolutely be able to capitalize on mismatches and opportunities created by his explosive teammates. With Harden there was always the sense that he was being held back by virtue of the amount Westbrook handled the ball. That’s rare for a shooting guard, but then only Manu Ginobili and Kobe Bryant share Harden’s playmaking acumen as shooting guards.

In Kevin Martin, the Thunder have a less dynamic player, but a tremendous scorer. It will be on Eric Maynor, Westbrook and Durant to pick up the playmaking slack.