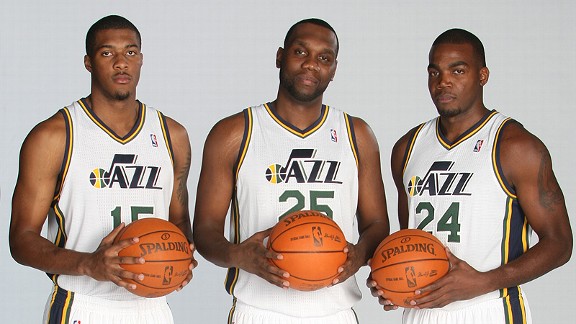 Prior to the 2011-12 season, coach Erik Spoelstra sat down with LeBron James and told the world's best basketball player that for the Miami Heat to overcome the shortcomings that held them back during Season 1 of their grand experiment, James needed to assume a role that was more power forward than small forward.

James accepted this premise, even if he wasn't enthusiastic about it at first. But once Shane Battier joined the fold and took on the responsibilities generally associated with a power forward's job description, James flourished. He played closer to the basket and expanded his game. Though the effects weren't instant, as the season went on, James became more comfortable and the seas parted for the Heat's offense. The floor opened up, and on the first night of summer, the Heat hoisted the Larry O'Brien trophy.

Two weeks after the NBA Finals, players, coaches, execs and scouts were touting the end of traditional positions in the NBA as the grand lesson of last season. For most, that meant that it was time to go small and spread the floor with shooters, irrespective of their size.

But wait a minute. Why does the end of traditional positions have to always mean "going smaller"? What if there's an equally reasonable argument that going the other way, leveraging size against stretch, is also a revolutionary idea?

We present to you the Utah Jazz, a team that has played three big men -- Al Jefferson, Paul Millsap and Derrick Favors -- together for 30 minutes over their past two games.

As a small-ball enthusiast, I've been somewhat skeptical of Jazz coach Ty Corbin's experiment, but the numbers show that it's working for Utah, at least on the offensive end of the floor. Granted, we're dealing with a small sample size, but during the 38 minutes Jefferson, Millsap and Favors have shared the floor with two perimeter players this season, the Jazz have outscored their opponents 95-79. The Utah Supersize lineup has posted an eye-popping offensive efficiency rating of 137.0 points per 100 possessions.

What about the defense? Favors is lightning quick for a 6-foot-10 forward-center, but you could time Jefferson's speed with a calendar, and even though Millsap hustles on every play, he is not exactly fleet afoot.

The defense suffers. The Supersizers have recorded a defensive rating of 111.1 per 100 possessions, which would qualify them as far and away the least efficient defense in basketball (Cleveland currently ranks 30th with a 107.8 rating).

But let's get back to this prolific offense. How do the Jazz score at such an insane rate with three guys who have drained a combined nine 3-pointers this season?

This Jazz Supersize lineup isn't in defiance of the new position-less NBA -- it's a flip side of the trend.

Utah has historically been a team that's flouted convention in favor of unique systems and counterintuitive solutions. This exercise is the most unique and most counterintuitive scheme in the NBA this season. It's certainly big.