LOS ANGELES -- It started with Jamal Crawford. The Los Angeles Clippers’ offseason import was instantly struck by how dynamic an athlete his new backcourt mate was, and so he needed a nickname that fit.

Thanks to Crawford, it’s what most of the Clippers are calling Eric Bledsoe these days. And now even his nickname-sake is joining in.

“[LeBron] actually called me that when we left the court,” said Bledsoe after the Clippers’ 107-100 victory over the Miami Heat at Staples Center. “Yeah, he did. He said, ‘This is Baby LeBron.’”

While Crawford often draws the (warranted) praise for his scorching off-the-bench scoring, Bledsoe has continued the sparkplug role he became associated with during last season’s playoff run. In his third season with the Clips, the 22-year-old has surged statistically through eight games: 10.4 points a game (up from 3.3), with 2.9 assists, 1.6 steals and 2.4 rebounds. The pace-adjusted numbers are even better: 22.18 player efficiency rating (PER), 23 points, 6.3 assists and 5.4 rebounds per 40 minutes. LeBron-like totals, one might say. And that’s not to mention his ferocious on-the-ball defense, his real forte.

Bledsoe, a nominal point guard who swings to off-guard on occasion, doesn’t have the same court vision as LeBron; at 6-foot-1, it’s hard probably hard for him to even see a large portion of the court. But he’s shown the same knack for the electric play.

Early in the second quarter against James’ Heat, Bledsoe didn’t disappoint. After forcing a Crawford turnover, Wade sprinted down the court, with only Bledsoe and Miami teammate Norris Cole parallel, and Lamar Odom loafing just behind. Wade, who was a game-time decision with a sprained left foot, slowed up a bit around the 3-point arc and then made his move to the basket, a bit more lethargic than expected. Bledsoe caught up with him midway through the paint and attached himself to Wade's hip. 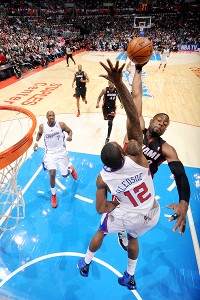 One train heading east was set to collide with another heading due northeast.

Wade rose just outside the restricted circle and cocked back his right hand, preparing to drop the hammer on the mighty-mite guard. But as Bledsoe began to descend from his big leap, he tracked the ball and swatted it away with his right hand, stumbling to the ground when he hit the hardwood.

It wasn’t a LeBron-esque chasedown block. More of a D-Wade specialty.

Midflight, Bledsoe wasn’t sure if he would come out on top of the faceoff.

“I didn’t,” he said. “Dwyane, he’s a great dunker. I just tried to get the ball back … and I just ended up blocking it.”

Bledsoe would put on another show shortly thereafter, turning the ball over and then stealing it right back and coasting for an easy 2. But his most impressive move of the night was more subtle. After Chris Paul scored the Clippers' final 12 points in the third quarter, Bledsoe got the start in the fourth and proceeded to drop in L.A.’s first eight to give the home team a 23-point advantage.

“As a point guard, Bled is unbelievable in transition and he’s unguardable,” Paul said. “He shoots the ball now and he attacks like no one else. Going into the fourth quarter, I just tell him to manage the game. As a point guard, you’re going to know that sometimes when you make a steal, Blake Griffin might be yelling for the ball in transition, and you just have to tell him hold on and just manage the game. Like Peyton Manning.”

Only, Bledsoe won’t be getting the call to help man the first unit anytime soon. Despite his stellar play of late and starting 2-guard Willie Green’s struggles, Vinny Del Negro said switching the two is “not going to happen right now.” Green’s ability to space the floor, Del Negro said, is too important to his starting lineup. (While Bledsoe would seem to make a worthy partner with Paul, the duo had played only 18 minutes together coming into the night, in which their lineups have totaled a minus-4 plus-minus.)

But while the news won’t please Bledsoe’s many Internet supporters -- or help Del Negro’s case with his many Internet detractors -- it’s hard to really bring the 2-guard down on this night. Especially when he jumps that high.

I reassured him that LeBron is, indeed, great.

Soon after, Bledsoe, with a big grin attached to his face, shook off a complimentary comment/question by saying that he just tries to play his role. From the next stall over, Chris Paul echoed his statement.

The next one, seconds after, was even louder.