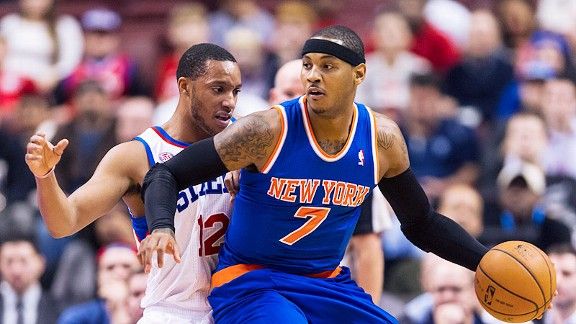 Defending Carmelo Anthony in the post is not easy, but there are ways to slow him down.More than ever, Carmelo Anthony is relying on his post-up game this season. After ranking among the best post-up players in the league last season, Carmelo is relying on post-up plays twice as often this season, with more than 25 percent of his points coming on post-ups.

This doesn’t mean Anthony is just posting up on the low block, especially now that he’s often being guarded by power forwards. He is using a variety of post-up moves on different parts of the court to get his points.

The Memphis Grizzlies are the only team to beat the New York Knicks this season, largely because they successfully defended Anthony in the post. They held him to just 1-for-5 shooting with two turnovers on post-up plays.

How did they stop him?

In the first quarter, Anthony posted up on the left elbow and drove left to the basket. Once he put the ball on the ground, help defense came and he missed a contested layup.

In the third quarter he posted up, again from the left elbow. Help defense came once he dribbled, and this time Anthony kicked it out to the perimeter.

Twice in the fourth quarter, he posted up on the right block. In both instances, a double team came after he began dribbling. On the first play, the Grizzlies forced a turnover. On the second play, they forced him to pass the ball out to the perimeter.

What’s the best way for teams to defend Carmelo in the post?

• Force him to back down his defender. With his back to the basket, Carmelo is shooting 6-for-15 this season.

• Once he starts backing down his defender, it may be wise to bring a hard double team. When Anthony has been double-teamed with his back to the basket, he has passed the ball on nine of 12 plays. All of those nine passes have been kick-outs to the perimeter. In fact, Anthony hasn’t passed the ball once to a cutter with his back to the basket this season.