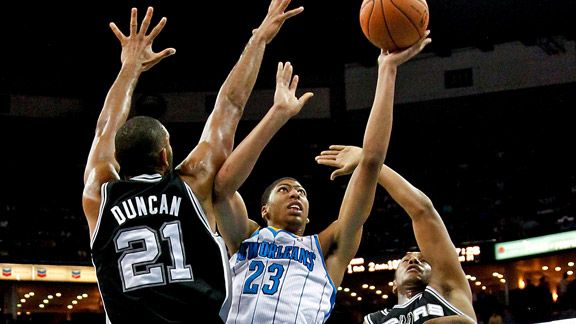 Anthony Davis put up 21 points in his NBA debut against Tim Duncan and the Spurs. In an article in June, ESPN Insider Chad Ford addressed the growing hype around Kentucky Wildcats big man Anthony Davis. Before Davis had even played an NBA game, Ford had some strong praise:

He’s just six games into his career, but Davis actually is exceeding expectations if that's possible. He's had some durability issues early on, but his efficiency when he’s been on the court has been outstanding. In fact, it's made comparisons to Tim Duncan look like an understatement.

Again, it's only six games. But Davis is also in his age-19 season; Duncan was already in his age-21 season as a rookie. The connection between Davis and Duncan goes beyond preseason comparisons -- they may be at different ends of their careers, but both players are doing things never seen before at their respective ages.

About a month into his career, Davis’ production (in terms of efficiency) would be the best in more than 30 years for a player in his age-20 season or younger, exceeding even the debuts of LeBron James and Shaquille O'Neal. In fact, Davis' current PER mark is the sixth-best in the NBA this season.

On the flip side, Duncan's season is just as impressive. He ranks third in PER this season, behind James and Kobe Bryant. If Duncan can keep it up, it would be the highest PER posted by a player in his age-36 season or older in the last 30 seasons, exceeding the impressive end-of-career runs of Karl Malone, Hakeem Olajuwon and Kareem Abdul-Jabbar.

While it is admittedly early, the historically-relevant performances of these two big men could be worth monitoring as the season moves along, particularly considering the parallels drawn between the Davis and Duncan by our own analysts prior to the start of the season.