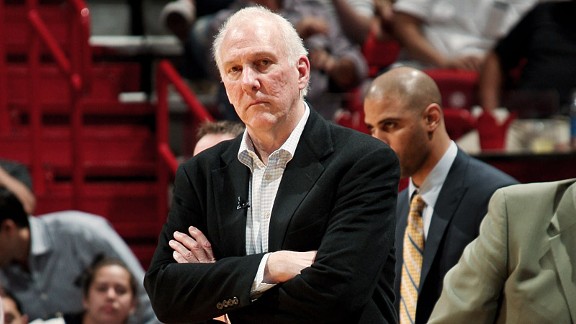 With his record, no one can accuse Gregg Popovich of not trying to win as much as possible.

I don't know if the Spurs read this exact study from the American Journal of Sports Medicine, but there are lots more like it, and clearly San Antonio knows a thing or two about valuing rest in a league that plays far more than twice a week. With strategic rests long part of its routine, San Antonio has been valuing rest more than any other team for more than a decade.

Which is smart. There's a reason owners recently voted Spurs owner Peter Holt chairman of the NBA's board of governors. The Spurs do just about everything right. Perhaps the smartest thing they have done is to entrust managing the basketball team to Gregg Popovich who, thankfully, doesn't do things like everybody else does.

Those little differences are his genius. Since Popovich took over, the Spurs have won more games than anybody in the NBA, even though he hasn't had Phil Jackson-like wonder rosters, Knicks-like spending or a Heat-like free agency haul. The Spurs have won with one sound decision after another, night after night, week after week, draft after draft, timeout after timeout, year after year.

The NBA, a league that would love to have all of its Derrick Roses and Steve Nashes at their best more games a year, should ask Popovich to teach seminars on keeping basketball teams healthy and functioning.

"The strategic resting of particular players on particular nights is within the discretion of the teams," deputy commissioner Adam Silver told NBA.com last April during the lockout-shortened season. "And Gregg Popovich in particular is probably the last coach that I would second-guess."

Agreed on all points.

In fact, a HoopIdea: The league should have people like Popovich weigh in on how they might tweak the league's schedule in accordance with the best injury prevention know-how in the world. Popovich evidently sees tremendous value in removing the two or three most injury-prone games from his player' schedules. Could having more stars healthy in the playoffs really be as simple as shortening the season by a game or three? That'd be a great trade. Would going even further help even more?

Meanwhile, instead of lionizing Popovich for his smart long-term thinking, the league is punishing him in the hopes he'll fall into line and play his guys like NBA coaches have always played them: close to 40 minutes a night until injuries make it so they can play no more.

What's increasingly clear, however, is that "the way it has always been done" is dumber than ever. For one thing, there's better research showing what causes injuries, and "toughing it out" through every night of a dense schedule is a rich part of the equation.

In addition, the league has changed. With the banishment of hand-checking and the allowance of zone defenses, Tom Thibodeau-style help defenses are the state of the art. This is great for fans -- it creates a lot of movement. Offenses that just pound the ball as everyone stands around aren't working very well, which was the point of the rule changes. But it makes more work for players. Now playing defense means rushing all over the court as part of a five-man shape-shifting amoeba, instead of standing next to a man watching somebody else dribble. Minutes on the court are understandably more tiring than they used to be for top players.

Since all that began, playing your best players long minutes night in and night out has become poor strategy. The more you dig in (and people way smarter than me have looked), the clearer the picture. The more we learn about how to keep players functioning at their best -- and who's against that? -- the more smarty-pants tacticians like Popovich are forced, by David Stern's schedule, to make unpopular decisions.

Stern didn't sit the Spurs' stars on Thursday, but his schedule did, even if that doesn't feel natural to most of us.

We all understand the value of short-term rest. LeBron James is the best player in the world, and he's in his prime. And yet for nine whole valuable nationally televised minutes of Thursday night's win over the Spurs, Erik Spoelstra kept him on the bench. Of course James could have played 48 minutes. How dare Spoelstra do that? It might have even helped the Heat put the Spurs away earlier.

But we all know why Spoelstra didn't do that: It's asking too much. James is central to all the Heat's hopes and dreams, and he'd pay the price eventually, either in injury or fatigue. Forty-eight minutes is too many.

The same is true of 82 games. That between Popovich and Stern, only one man has embraced that reality and acted on it is no condemnation of the coach.