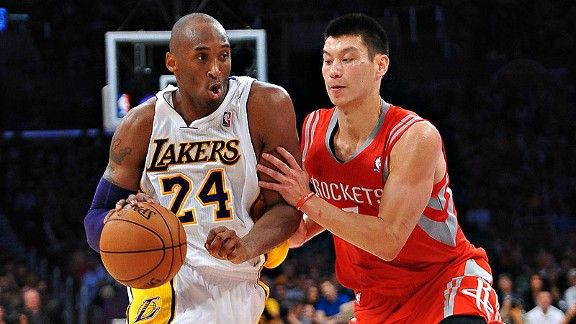 Thanks to an NBA career that began at age 18, Bryant (age 34) is poised to become the youngest player to reach the mark. There is an outside chance he could eclipse 30,000 points tonight, as he has scored at least 52 points in a game 14 times in his career. What's more, three of those games have come against the Rockets, which is tied for his most against any opponent.

While Bryant will be the youngest to reach 30,000 career points, he is also getting there with more mileage. He has over 7,000 more career minutes played (including playoffs) than Jordan had when he reached 30,000, which is approximately two and a half 82-game seasons averaging 35 minutes per game.

Youngest to 30,000 Points in NBA History

What is the rough equivalent of reaching 30,000 points in the NBA? Based on how rarely it is attained, it is similar to several other elite milestone across pro sports. Only four players have 50,000 passing yards in the NFL, while only five players have reached 3,500 hits in MLB.

Looking ahead, when will Bryant potentially move up the scoring ladder? Assuming he averages 25 points per game and does not miss another game this season, he would match Chamberlain by the end of this season.

As for catching all-time leader Abdul-Jabbar, if Bryant keeps up his 25.0 points per game pace, which is roughly his career average, he could track him down in the 2016-17 season.

Elsewhere, the Miami Heat (12-3) travel to play the Washington Wizards (1-13) tonight in a notable mismatch (more than a 700-point difference in winning percentages). According to Elias, over the last 20 seasons visiting teams with that large of an advantage in winning percentage this late in a season (with both teams having played 14 games) are 26-7.

In addition, the Wizards are running into a very hot Miami squad, as the Heat are riding a season-high six-game win streak and are looking to start 13-3 for the first time in franchise history.

Adding to the Wizards’ woes is their poor three-point shooting. They have attempted 305 three-pointers, their most in franchise history through 14 games according to Elias, but have connected on just 30.2 percent. That's their second-lowest percentage in the three-point era (minimum 200 attempts) over that span.