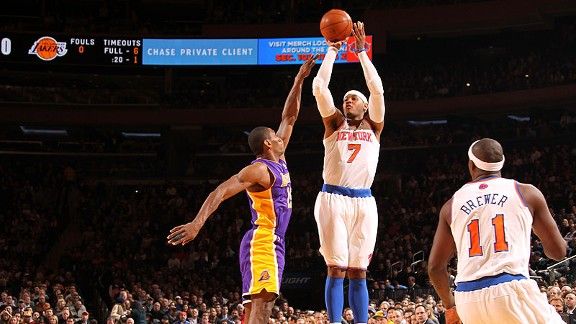 Carmelo Anthony is putting up bigger, and better, numbers this season.(The New York Knicks host the Brooklyn Nets, Wednesday at 7 ET on ESPN.)

The New York Knicks are coming off a loss on Monday to the Houston Rockets. They’re hoping to have Carmelo Anthony back against the Brooklyn Nets after missing the past two games with an ankle injury.

In two games this season against the Nets, Anthony has scored 80 points -- including a season-high 45 on Dec. 18.

In those two games against Brooklyn, Anthony made eight of 12 3-point attempts. Shooting behind the arc is one area of his game that has improved significantly.

Before this season, Anthony was a career 32 percent shooter behind the arc. That average has shot up to 45.5 percent (51-112) this season.

Long-range shooting isn’t the only area of Anthony’s game that has improved. He’s also shooting a career-best 46.8 percent on mid-range shots (which are 2-point field goal attempts taken outside the paint). Last season, he made just 38.9 percent from that distance.

Another reason the Knicks would like to see Anthony return? He ranks fifth in plus/minus at +167. He’s been on the court for 712 minutes compared to 445 off it and the difference has been noticeable. Per 48 minutes, the Knicks are outscoring opponents by 11.3 points with Anthony on the court, but are getting outscored by almost two points with him off the court.