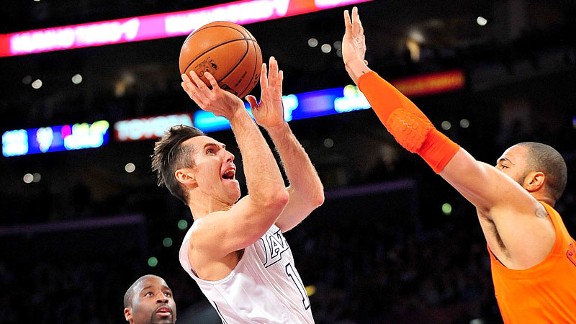 Steve Nash's floater has been accurate since his return from a broken leg.

Since coming back from his leg injury, Steve Nash has helped the Lakers to wins over the Golden State Warriors and New York Knicks -- the Lakers' best victories of the young season. Nash has averaged 14 points and 10 assists in those contests and infused the Lakers with a greater sense of organization and purpose on offense.

Here's a look at what Nash has been up to since his return:

The Lakers’ first two points on Christmas came off a Nash running floater on which he picked up his dribble just behind the free throw line and casually, delicately lofted the ball in without ever touching it with his off hand. Nash has a way of performing trick shots like that one with an earnestness that suggests he’s practiced the shot hundreds of times.

Over the past few seasons Nash has lost some of his quickness, and he’s no longer the same threat he once was to take the ball all the way to the rim. He now relies on his expansive arsenal of in-between shots, including floaters, leaning jump shots off the wrong foot, and the occasional running hook shot to keep the defense honest.

Initiating the pick-and-roll early in the shot clock

Behold: the power of the early shot clock pick-and-roll!

Running high pick-and-rolls, often with Dwight Howard as the big man trailing the play, doesn’t directly lead to a hoop all that often. But what it does is to pull the defense out of position with around 18 seconds left on the shot clock, plenty of time for the Lakers to work for a good shot. And even when Howard doesn’t get the ball on the roll, the action helps him establish ideal post position near the basket.

The Lakers have made productive use of Nash’s relatively unexplored powers as a screener, particularly when Pau Gasol has the ball in the high post. Nash will pass into Gasol and cut through, either to find his teammate’s defender in the corner or to sneak behind Howard’s defender to set up a lob pass. Gasol is a fantastic passer and is starting to develop better chemistry with Howard, in particular, on these sets. Meanwhile, Kobe Bryant, Jodie Meeks and Metta World Peace all scored against the Knicks -- the latter two on 3-pointers -- by coming off Nash picks out of this corner screen look.

Turning the ball over

Like many hyper-creative point guards, Nash has always been a bit loose with the ball and has a habit of jumping to pass (and a knack for getting away with it). But as he’s slowed down and become less elusive with his dribble, he’s also become easier to trap. The combination of age and weaker teammates sent his turnover per possession rate skyrocketing last season. Though he's kept his turnovers in check in the few games he's played this season, how he responds to serious ball pressure, something that’s troubled him more than it used to over the past couple of seasons, is still something to monitor.

The Lakers haven’t yet had opportunity to explore this look fully, but the Nash-Bryant two-man game has the potential to be absolutely devastating. Defenses will often switch when these two run pick-and-rolls, leaving the point guard on Bryant, who excels at punishing smaller players from the post. In response, the defense will usually send a double-team. If the double comes from Nash’s man, Bryant can kick it out and let a great decision-maker attack a 4-on-3. If the double comes from the weak side, Bryant will have two massive targets in Gasol and Howard cutting toward the basket.

Nash is also great at feathering in a post entry pass, and can hit Bryant without forcing him to relinquish his position to catch the ball.

With the Knicks within a few points and the game entering the last five minutes, Nash and Howard ran the high pick-and-roll on six of the next nine Lakers possessions. The result:

Seven points on six plays isn’t cause for a parade, but it’s worth noting that Bryant was not involved in the majority of Lakers possessions in the last five minutes.

Getting hung up on screens

Whether he’s defending a point guard in a pick-and-roll or chasing someone such as Klay Thompson around picks off the ball, Nash has trouble navigating screens. On the ball, he lacks the quickness to recover if he gets out of position, and he’s too small to much bother big, jump shooting guards when they're running off screens.

The Lakers will do what they can to hide him defensively, and Nash is a responsible team defender who will be in the right position off the ball. Against the Warriors’ three-guard lineup, there was nowhere to stash Nash that Golden State couldn’t exploit. But he did better against the Knicks when New York played three guards and Nash could focus on staying attached to Jason Kidd along the 3-point line.