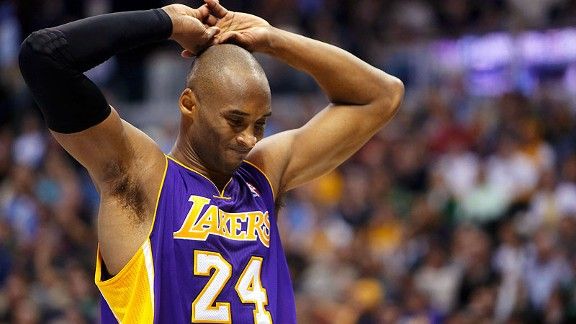 Kobe Bryant and the Lakers are 15-16 this season.After the Los Angeles Lakers’ loss to the Philadelphia 76ers on Tuesday, Kobe Bryant called the Lakers an “old damn team” and said “we’re just slow.”

Is Kobe right? Perhaps the Lakers are too “old” and “slow” to be playing Mike D’Antoni’s fast-pace system.

Lakers Record by Possessions
With Mike D’Antoni as Head Coach

Early in the season, a fast pace wasn’t an issue, as the Lakers won their first three games in which they had at least 100 possessions.

But lately, they haven’t been good in fast-pace games. They’ve lost six of their last seven games with at least 100 possessions.

The Lakers' offensive efficiency can also be linked to pace, as they have been more efficient offensively with a slower pace under D’Antoni. They’ve scored more than 100 points per 100 possessions in each of their 10 games under D’Antoni with a pace of 95 or lower.

Lakers Possessions Per Game
This Season

This could be a problem going forward, as it appears the Lakers are playing at an even higher pace now that Steve Nash is back. Since Nash returned, the Lakers are averaging nearly 99 possessions per game, third-most during that span.

Despite scoring 99 points and only losing by four, Tuesday’s loss to the 76ers was the Lakers’ third-most inefficient offensive performance under D’Antoni. The Lakers scored less than a point per possession (and barely over a point per field-goal attempt) in a game that included 102 possessions.

The Lakers shot 39 percent from the field and 3-of-22 on 3-point attempts, their worst 3-point shooting performance this season.

Based on the evidence above, slowing the game down appears to be the optimal strategy for the Lakers.