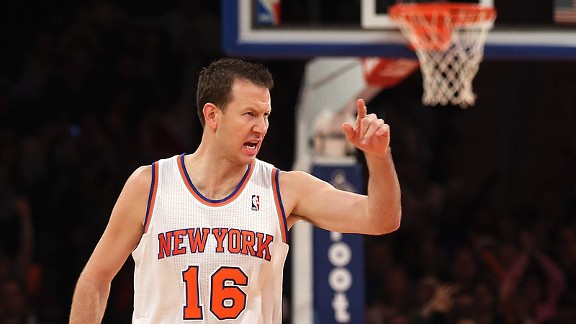 Steve Novak's elite NBA skill is shooting and his defense is a joke. Right?

Chandler is, by reputation, typically a candidate for defensive player of the year.

Novak is, by reputation, typically a candidate for worst defensive player of the year.

I love surprises like this. Why? Because statistics are handy when they confirm stuff we thought we knew, but they're way cooler when they make us think in new ways. That's when teams can get good players on the cheap, draft smarter and generally make better decisions.

And this surely blows our minds. I tweeted that Novak has high defensive ratings. The reaction was swift, emphatic, and negative -- especially from Knicks fans, who you'd think might be happy to learn of their players' evidently hidden talents. Not so:

What Synergy does, and what most NBA teams pay mightily for, is employ an army of people to watch every second of hoops in the NBA and other leagues and categorize every single play various ways -- for instance, as a spot-up, isolation or pick-and-roll. Then those plays are fed into an ever-changing database where you can look up all kinds of things that were never available any other way.

Statistics aren't the final word in much of anything in basketball, especially when it comes to defense, which is really not well-converted into numbers anywhere. Any individual defensive ratings are guaranteed, at this point in history, to miss a lot.

But that doesn't mean there aren't lessons in there, if you dig carefully. And those Synergy loggers have found 209 plays this season where in their view Novak's defense was on display. These fall into set categories. Every play is a spot-up, pick-and-roll, isolation, post-up, "off screen," or hand off. And what you can see for yourself is that opponents scored a measly 158 points on those 209 plays. I think we can agree that's an excellent rate -- in 209 plays against other NBA defenders, you'd expect many more points.

That does NOT mean that Synergy, or anyone else, recommends deploying Novak as a go-to stopper. And other stats, for instance from 82games, show that the Knicks' defense is better when Novak is on the bench. The eyes may not lie: Presumably, Novak's shortcomings are hurting the Knicks in ways that Synergy is not catching. He is likely not a great defender.

But the way Synergy works, all of those plays so neatly logged really do mean that if you insist he's a horrible defender, you have 22 minutes of video to explain, and that's just from this season. Those plays are real, they exist, they're recent, and they show opponents struggling to score against Novak for some reason or another.

I just watched 'em all. And there are some interesting things going on for sure.

The first is that Novak is pretty slow laterally. And, frankly, longitudinally. Sometimes this matters. For instance, at Sacramento on Dec. 28, Novak chased Jimmer Fredette to the wing. Once there, Fredette caught the ball and used the amazing technique of ... turning quickly in the other direction, back from where he came. Novak, who turns like a cruise ship, had no hope. Fredette's path to the hoop was broad and wide. In these moments, tweets like those above are born.

Speed kills, and it kills Novak more than many. And that's also easy to see in pick-and-rolls.

The Knicks have rim protectors such as Chandler and Marcus Camby playing behind Novak. Against a lot of offensive players, Novak trails his man around the screen in a pick-and-roll, presumably at Mike Woodson's direction. This leaves Novak's man with a live dribble, a path to the basket and Novak a step behind looking slow-footed.

But no matter how this moment advertises Novak's lack of speed, with Novak a half-step behind and Chandler or Camby at the rim ... that's still a tough situation for the offense. Pause and Novak is back in position. Attack the rim and face a bona fide shot-blocker. Pull up and rush a floater and you're selecting a shot very few NBA players make regularly.

Novak consistently looks like a bad defender, moving slowly in open space. But that is not the same as consistently making it easy for opponents to score, and he is long, tall (6-foot-10) and focused. And while he gets around picks slowly, the worst NBA defenders don't get around the pick at all for lack of fighting -- it's called "dying on the pick" and it's fairly common. By not falling asleep at the wheel, having long arms and almost never biting on fakes, Novak is absolved of some of his sins of slowness -- as evidenced by opponents' poor field goal percentage.

More obvious than Novak's lack of speed, however, are the wide eyes of his opponents. Basically, what the video shows is player after player with an almost visible thought bubble over their heads: HOLY COW I HAVE STEVE NOVAK ON ME AND HE'S HORRIBLE. TIME TO FIRE AWAY.

Why is Novak's reputation so bad? He is slow. He is scrawny. Whatever a defensive stopper looks like -- he's not it. Race is probably part of it, too; whiteness does not help a defensive reputation in the NBA, something players and coaches occasionally will admit.

Whatever the motivation, the video is a parade of aggressive decision-making by the second-tier offensive players Novak typically guards. Hoopdata tells us the Kings' James Johnson makes less than a third of his shots outside the paint. But that didn't stop him pulling up for a long 2-pointer -- among the least efficient shots in the game for any player -- over Novak. Whatever the Knicks' chances of getting a stop on that play might have been, they went way up when Johnson elected to heave from a step inside the 3-point line.

The Suns' Markieff Morris -- hardly the team's first scoring option -- couldn't wait to post Novak up, did so, and missed. A week and a half earlier, Markieff's twin brother, Marcus, wasted two Rockets possessions with a brain on "Novakaine," dribbling his way into contested long 2s, neither of which came close. A host of Timberwolves -- for instance, Derrick Williams in the post and J.J. Barea with a step-back off the dribble -- powered up tough shots with Novak Eyes. The Bulls took turns going after Novak, which resulted in unheralded Jimmy Butler and Marco Belinelli forcing 2s off the dribble over a taller player.

No matter how bad Novak may be on defense, goading those weak offensive players into the weakest parts of their arsenals is good for New York. All those shots that might have been taken by James Harden, Kevin Love and company.

Players want to go at Novak -- typically in isolation plays -- presumably because he's slow. And of all the ways to exploit Novak's slowness, isolating him is among the least effective. One-on-one plays take place in a small area and Novak seldom loses his man entirely. The result is normally a contested shot. Novak's defensive ratings are, in fact, especially elite in isolation. Synergy is often dinged for sloppy charting, but this is the least complicated play in basketball and easy to chart. Teams isolate him, and score about half a point -- pathetic -- per possession.

This dynamic of players delighting in attacking Novak, often foolishly, explains both Novak's bad reputation and his excellent Synergy numbers. Novak is in all likelihood an OK defender who people think is a horrible defender. Offensive players see him coming and lose their minds with the conviction that it's time to shoot, even if the shot is both difficult and contested.

The whole thing works out reasonably well for the Knicks. They get to keep a deadly but admittedly unathletic shooter -- Novak's New Year's resolution is to dunk -- on the floor without paying much of a price on defense, because his reputation tricks opponents into poor decisions.