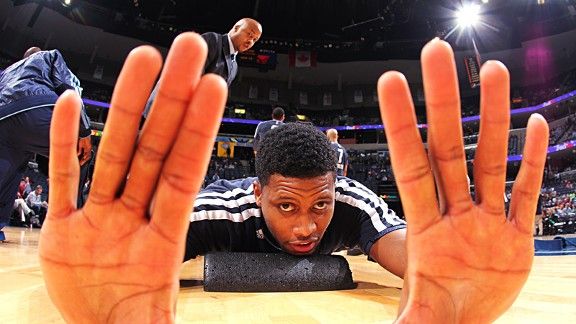 RENO, Nev. -- The Memphis Grizzlies have not made an iron-clad decision about trading swingman Rudy Gay before the league's Feb. 21 buzzer for deals, according to NBA front-office sources.

The Toronto Raptors, by contrast, have definitively decided to make a real run at Gay.

The Raptors might not be able to swing a deal for him. But they'd love to.

Sources told ESPN.com this week that the Raptors -- who tried to make a play for Gay before the 2012 NBA draft -- remain seriously "interested" in the Grizzlies' leading scorer and are trying to assemble trade packages to bring the 26-year-old to Toronto after preliminary talks with Memphis.

Among the trade chips that the Raptors are believed to be dangling, in addition to draft considerations, are veteran point guard Jose Calderon (who has an expiring contract worth $10.6 million) and young big man Ed Davis.

Grantland's Zach Lowe reported last week that the Grizzlies had begun the process of letting various teams know that Gay would be available in the right deal before the annual February trade deadline. Sources consulted in Reno during the NBA's annual D-League Showcase have described the bulk of those discussions to date to be exploratory in nature, but Toronto, as part of that process, has let it be known to the Grizzlies that its desire to acquire Gay has not waned.

It was widely assumed around the league coming into the season that the Grizzlies' new ownership group, headed by majority owner Robert Pera and CEO Jason Levien, would look into moving Gay to lessen Memphis' luxury-tax obligations after this season and coming seasons.

But the Grizzlies, with their three top players finally all healthy and playing in unison after two player runs impacted by health matters, got off to a rousing 14-3 start and, despite fading slightly to 22-10, are generally regarded as a team capable of winning the ever-competitive Western Conference.

That has led some rival teams to project that the Grizzlies, as one GM in Reno put in Tuesday, could "wait until the summer" before deciding whether they're indeed prepared to break up the Zach Randolph-Marc Gasol-Gay trio.

Yahoo! Sports reported Tuesday that the Phoenix Suns, like the Raptors, have let the Grizzlies know that they are prepared to trade for Gay by packaging swingman Jared Dudley with future first-round picks. The Memphis Commercial Appeal subsequently reported that the Sacramento Kings are also among the teams to engage the Grizzlies in preliminary Gay talks, with CBSSports.com and the Contra Costa Times reporting that similar discussions between Memphis and Golden State quickly ended when it became apparent that the Warriors would have to include the contract of Richard Jefferson to make the salary-cap math work.

The Raptors, meanwhile, tried to trade for Gay six months ago, offering up various packages headlined by the No. 8 pick in the draft (eventually used on Terrence Ross) and Calderon. The Grizzlies, still owned by Michael Heisley at the time, passed.

Word is that the Grizzlies' new regime is adamant that it won't merely try to dump salary by dealing Gay in-season if it severely weakens their team in the process. Gay, averaging a team-high 17.8 points per game but shooting a career-low 40.8 percent from the floor, is earning $16.4 million in 2012-13 and is scheduled to earn $17.8 million and $19.3 million in the following two seasons.

Said another GM: "I think keeping Gay is still on the table for them, too."