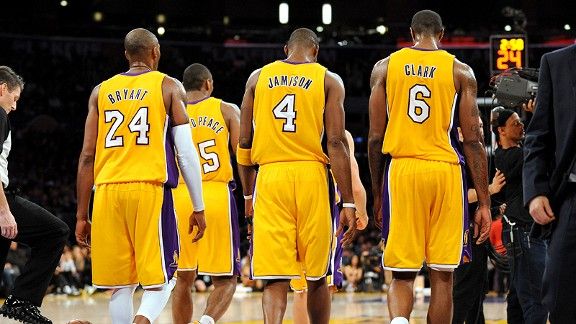 The Lakers have lost a season-high six straight games.It might be time to panic in Los Angeles -– well, at least for Lakers fans.

The Lakers now have lost six straight games, their longest losing streak since March 2007. They’re within striking distance of their franchise-record 10-game losing streak in April 1994.

It’s now very realistic that the Lakers might not make the playoffs.

In the past five seasons, the worst win percentage for a Western Conference playoff team was .545 last season by the Dallas Mavericks and Utah Jazz. In an 82-game season, that would be 45 wins.

In order for the Lakers to reach 45 wins, they would need to finish with a 30-16 record.

How realistic is that? Only two teams have ever finished a season with at least 45 wins after starting 15-21 or worse, according to the Elias Sports Bureau -- the 2004-05 Denver Nuggets and 2009-10 Milwaukee Bucks.

What’s wrong with the Lakers?

Since Mike D’Antoni took over on Nov. 20, the Lakers have been the sixth-worst team in terms of defensive efficiency.

This has much to do with playing at the second-highest pace under D’Antoni.

They were the eighth-best defensive team in their first 10 games of the season while playing at the ninth-highest pace.

The Lakers have had trouble defending opposing teams' best players. During their six-game losing streak, the Lakers have allowed star players to score well above their season scoring averages:

Injuries don’t help the situation. But turning the Lakers' season around likely will have to start with much-improved defense.

Improving on the defensive end and winning more games could be much easier if the Lakers can slow down their pace.

The Lakers have had a pace of 100 or more possessions in each of their past four games -– all losses, of course. The Lakers now have a 7-16 record this season in games with a pace of at least 96 possessions, but they’re 8-5 when the pace is 95 or slower.