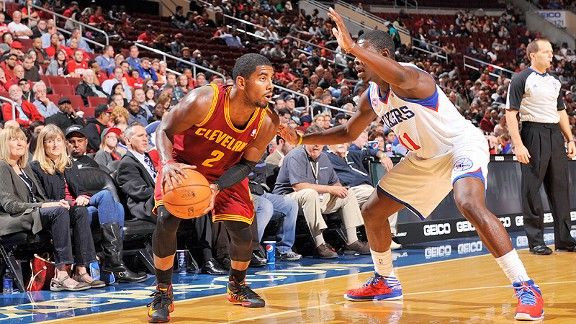 A look at the seven players selected to their first All-Star team this season:

James Harden becomes the first Houston Rockets All-Star since Yao Ming in 2011. Harden ranks fifth in the NBA, averaging a career-high 25.9 points this season. His scoring has increased by 9.1 points per game from last season, the highest increase among all players from last season to this season.

The NBA’s reigning Sixth Man of the Year award winner has been one of the best pick and roll ball handlers this season. Among the 107 players with at least 50 such plays, Harden ranks second in the NBA, averaging 1.03 points per play.

Highest PER This Season

After playing just five games during an injury-plagued 2011-12 season, Brook Lopez makes his first All-Star team in his fifth NBA season. Lopez averages an NBA-high 18.6 points among centers this season.

According to the Hollinger PER (Player Efficiency Rating) rankings, Lopez ranks fourth in the NBA with a mark of 25.4. Only LeBron James (30.3), Kevin Durant (29.1) and Chris Paul (26.1) have recorded a higher PER this season.

In his second NBA season, Kyrie Irving becomes the first Cleveland Cavaliers All-Star since LeBron James in 2010. According to the Elias Sports Bureau, Irving will be the sixth-youngest player in NBA history to play in an All-Star Game at 20 years and 331 days old on February 17.

After winning Rookie of the Year last season, Irving has blossomed into one of the best guards in the NBA this season. He ranks fourth among point guards with a 22.5 PER.

Jrue Holiday becomes the second member of the Philadelphia 76ers in as many seasons to earn his first All-Star selection (Andre Iguodala, 2012). Holiday is averaging career highs in points (19.4), assists (8.9), field goal percentage (46.1) and rebounds (4.1). He and Russell Westbrook are the only two players averaging at least 19 points and eight assists this season.

Holiday has assisted 40 percent of his teammates’ field goals when he’s been on the court this season. That assist percentage ranks fifth in the NBA.

Paul George leads the Indiana Pacers in scoring, averaging a career-high 17.4 points this season. Despite his emergence on offense, George has made his biggest impact on defense. George ranks second in the NBA with 3.5 defensive win shares according to Basketball-Reference. Defensive win shares estimates the number of wins contributed by a player due to his defense.

Most Defensive Win Shares
This Season

Joakim Noah is one of two Chicago Bulls selected as All-Star reserves (Luol Deng). Noah is averaging career highs in points (12.1), rebounds (11.3), and assists (4.2), which leads all centers. Noah has recorded at least 10 points, 10 rebounds and five assists in 11 games this season. Only LeBron James has recorded more such games with 13.

Noah has anchored a Bulls defense which ranks third in defensive efficiency, allowing just 97.5 points per 100 possessions this season. He leads the NBA in defensive win shares with 3.7 and ranks eighth in blocks with 2.1 per game.