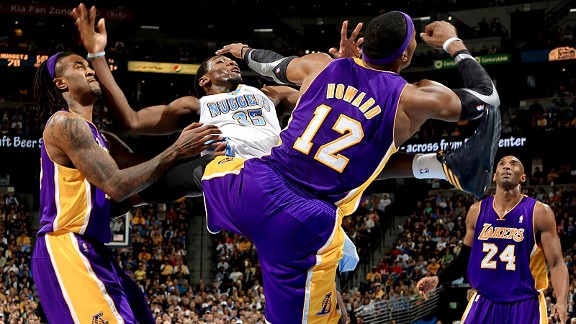 The NBA isn't doing everything it could to prevent blows like this one.

For a "noncontact" sport that allegedly doesn't have a concussion problem, basketball sure does feature a lot of blows to the head.

Now you might say, this is a physical sport. Who could be alarmed if that physicality involves the head once in a while?

Blows to the head are different. Entirely different. All that "what doesn't kill you makes you stronger" talk appears not to apply here. Every blow to the head has the potential to cause awful long-term consequences.

Once we used to once chuckle about a player "getting his bell rung." Now, as many NBA players can tell you, we know that's just not funny anymore.

The only reasonable thing is to do whatever you can to keep people from getting hit hard in the head.

The NFL is doing serious soul-searching because of concussions and is considering profound changes to the most successful sports business in global history.

Meanwhile, the NBA has a big advantage over football: Blows to the head aren't anything like as common, and, thankfully, there are not a lot of tales of players suffering the kinds of mental diseases that are increasingly associated with retired NFL players. Also, the NBA has been pro-active, touching off a concussion program with potential to improve player safety.

HoopIdea is about taking a great game and making it even better. The opportunity is there to reduce these most dangerous of NBA plays.

Some NBA head shots are part and parcel of big bodies moving quickly. For instance, a surprising number of concussion-causing moments of this season were caused by incidental contact between teammates. Anthony Davis bumped into Austin Rivers, Michael Kidd-Gilchrist collided with Jeffery Taylor. Chris Kaman was hurt in Mavericks practice. It will probably never be possible to bring the number of concussions down to zero.

However, many other dangerous, head-banging plays are born of strategy which only makes sense because NBA rules are out of whack.

Right now, players have every reason to whack each other in the head -- coaches demand a "no layup" policy, and the league does little to deter the kinds of blows listed above (which represent a fraction of the total). The benefits are real and range from literally knocking opponents to the floor to scaring scorers away from the high-quality shots near the basket. In many cases, there is no punishment at all. In other cases, there is simply a free throw or two (for a technical or a flagrant) for plays that are applauded by teammates, coaches and commentators -- and are believed to help a team's chances of winning through intimidation.

The NBA needs to lead the way in changing that.

Medical science could not be more clear: A play that causes a blow to the head carries far greater risk of serious injury than other kinds of contact.

Time for the rulebook to catch up. At the moment, and despite what you may have heard, the rules say literally nothing about fouls to the head carrying bigger penalties -- although the league has sent a memo to players explaining the many things referees consider when assigning flagrant fouls, and "a blow to the head" is on the list.

The solution: Make both blows to the head and plays that lead to heads hitting the court hard (for instance, undercutting airborne players) part of the definition of a Flagrant 2, punishable by ejection and, at the league's discretion, suspensions too.

We want every player doing their best to make sure nobody has a life-altering injury.