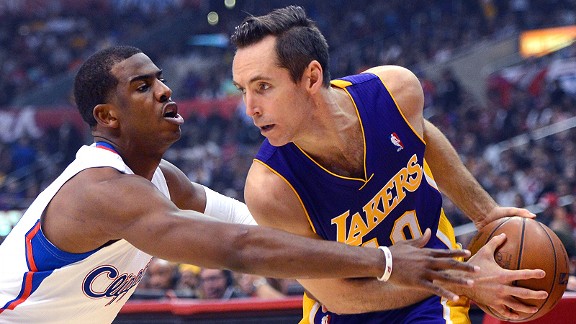 The NBA is a superstar league, but it’s often governed by systems. “The system” can be a monument or a mess. It can bring out the best in some players while alienating others. If executed to perfection, it can win a team a title. A system can delight purists, annoy the casual fan and drive a wedge between a coach and management. A system is philosophy, physics, architecture and chaos theory all rolled up into one.

For the Los Angeles Lakers, 2012-13 has been the Season of the System. Mike Brown was fired for a failure to effectively implement his Princeton offense, then succeeded by Mike D’Antoni, the architect of a high-octane spread pick-and-roll system that’s been appropriated by coaches all over the league. Had many Lakers fans had their druthers, Phil Jackson would’ve returned to re-institute the triangle, the gold standard of modern-day systems.

Back in November, when Los Angeles was engulfed in system overload the week Brown was dismissed and D’Antoni hired, Los Angeles Clippers coach Vinny Del Negro was asked which system he deployed.

Del Negro wasn’t being flip or coy. The question was straightforward, and he offered the best approximation of his team’s blueprint when it had the ball -- the Chris Paul System.

“All those names and all that stuff,” Del Negro said of the Princeton, the spread, seven seconds or less, etc. “You just put the ball in the best player's hands.”

To Del Negro and Paul, the NBA is a superstar league, and the offense they run is dictated by Paul. In the Clippers’ world, his instincts take precedent over any dogma. That intuition is rooted in strong principles. Paul will probe, but he’s meticulous and patient, and in the half court he’ll rarely act until the defense is leveraged.

Draw the defense, make the play. Apart from that, there’s no defined program etched into the Clippers’ playbook. A system has principles, but not every principle belongs to a system.

Down the hallway at Staples Center, D’Antoni subscribes to a different basketball value system, but his doctrine has been a tough sell in Los Angeles, particularly to his big men. In the confines of D’Antoni’s system, size and length aren’t virtues unto themselves. Big men have the same imperatives within the offense as the little guys -- they must stay in motion, move the ball and keep the paint vacant so that there’s space for drives and cuts. Want to make yourself useful? Set a drag screen, make a quick pass from the high post, do anything that keeps the offense moving.

For Pau Gasol prior to his injury and Dwight Howard, who’s nursing one of his own, D’Antoni’s system has been vexing. Gasol won championships in a triple post offense, while Howard feels he can bully anyone on the left block if you just feed him the ball. All the while, Steve Nash, who flourished under D’Antoni’s system in Phoenix, has remained quiet on strategic matters, and Kobe Bryant has largely turned the conversation away from a debate over tactics and toward a discussion about urgency.

For all the comparisons drawn between the Lakers and the Clippers -- their disparate histories, the organizational credo, even Clipper Darrell versus the Lakers Bros -- the most prominent contrast this season among basketball junkies in Los Angeles has been the strategic visions of each team. The Clippers have found harmony in simplicity, while the Lakers have butted heads over academic differences. The Clippers make plays, as Paul says, while the Lakers lock horns.

The great irony in all this? The two teams rank seventh and eighth in offensive efficiency. The Clippers score 106.1 points per 100 possessions, while the Lakers score 104.8. Over the course of your average NBA game, that amounts to approximately one Dwight Howard missed free throw.

The daylight between the two teams, who square off Thursday night in their third meeting this season, is on the defensive end, something that often gets lost amid the contentiousness surrounding the Lakers and whatever competing agendas exist in their camp.

Neither team features a hard-and-fast system on that end of the floor, but the Clippers rely on the same brand of simplicity that drives their offense -- maximize strengths like speed and athleticism, and communicate when a situation calls for clarity. Howard was supposed to be the Lakers’ defensive strength -- the Chris Paul of rim protection, the guy who when a defensive possession went awry could quickly erase the mistakes. Only it hasn’t played out that way -- there is no “Dwight Howard System” in Los Angeles yet.

Do NBA teams need systems to fall back on, as D’Antoni maintains? Can common sense trump organization on the court when the stakes are raised, as Paul and Del Negro believe? There’s probably a happy medium -- but right now, the Clippers are more happy, while the Lakers are more medium.