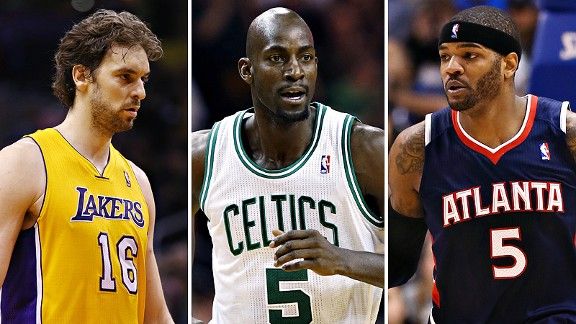 Pau Gasol (left), Kevin Garnett (center) and Josh Smith (right) are all rumored to be on the move.

One thing we know as the NBA's Thursday trade deadline approaches: trades will happen. At least one trade has been completed on the day of the deadline each year since 1987.

The last three years? At least eight deals went down on deadline day each season.

But we also know these players rarely go on to make an impact on the championship picture.

Only four players in NBA history were traded to teams where they played at least 20 minutes per game the rest of the season and went on to win an NBA title. Below is a look at those four deadline difference makers:

On February 19, 2004, the Pistons acquired Rasheed Wallace from the Atlanta Hawks and Mike James from the Boston Celtics. Detroit was 34-22 at the time. After the trade, the Pistons went 20-6 the rest of the season, including two eight-game win streaks.

The Pistons were heavy underdogs in the Finals against the Lakers but would go on to win the series in five games.

On February 14, 1995, the Rockets acquired Clyde Drexler and forward Tracy Murray from the Portland Trail Blazers for veteran forward Otis Thorpe, a 1995 first-round draft choice and the draft rights to forward Marcelo Nicola. Houston was the defending champion and 30-17 at the time.

The Rockets were actually under .500 after the trade (17-18) and would enter the postseason as the No. 6 seed in the West. Houston survived scares in the first round against Utah (2-1 deficit) and against the Suns in the Conference Semifinals (3-1 deficit) before knocking off the Spurs in the Conference Finals. In all, Houston survived five elimination games before sweeping the Magic in the NBA Finals to become the lowest seeded team to win the NBA title since seeding began in 1984.

Detroit went 15-2 in the postseason with Aguirre starting all 17 games. The Pistons swept the Lakers in the 1989 Finals to win their first NBA championship.

On February 13, 1987, Mychal Thompson was traded by the Spurs to the Lakers for Frank Brickowski, Petur Gudmundsson, a 1987 first-round draft pick and a 1990 second-round draft pick.

The Lakers were 37-12 through February 13 and then went 28-5 the rest of the regular season. In the playoffs, they swept the SuperSonics in the Western Conference Finals and beat the Celtics 4-2 in the NBA Finals to win their fourth championship in eight seasons.