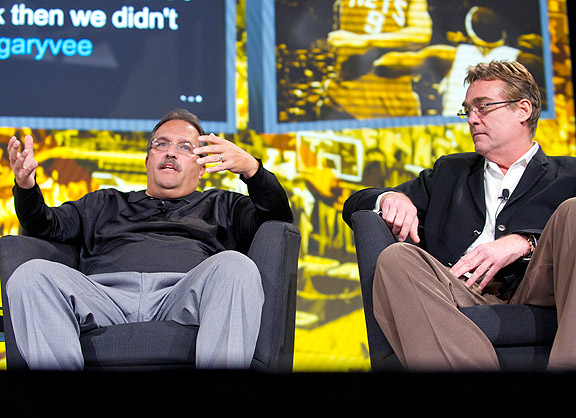 Two years ago at the 2011 MIT Sloan Sports Analytics Conference in Boston, an NBA player agent was spotted roaming the halls of the Boston Convention & Exhibition Center.

The sighting came as a surprise because the conference had generally been the province of stat geeks, a few executives from the teams that employed them, along with digital journalists and bloggers who worshiped at the altar of advanced stats.

“Out of your element, aren’t you?” the agent was asked.

“Yeah, but this is where the action is,” he said.

The dialogue was reminiscent of a scene from 1992’s “The Player,” directed by Robert Altman. Smarmy studio exec Larry Levy (played by Peter Gallagher) drives through Los Angeles in his Porsche with the top down. On his early-model mobile phone, Levy tells rival and colleague Griffin Mill (Tim Robbins) that he’s headed to an Alcoholics Anonymous meeting.

“I didn't realize you had a drinking problem,” Mill says.

“I don't really, but that's where all the deals are being made these days,” Levy says.

Two weeks after the trade deadline, it’s unlikely that any deals were being made on the floor of the convention hall, but MIT Sloan has grown from a conference that not so long ago occupied a couple of lecture halls on the MIT campus for eight hours, to a two-day event with thousands of attendees. Several of those in Boston last weekend were prominent team executives who as recently as a couple of years ago regarded the conference as nothing more than a celebration of the esoteric. Today, those execs want to be engaged in the movement or, like our agent in 2011, have a severe case of F.O.M.O.

What would they be missing out on? The novelty of advanced stats isn’t new. NBA teams like the Houston Rockets, Dallas Mavericks, Boston Celtics, Denver Nuggets and Cleveland Cavaliers, among others, have been relying on analytics to evaluate player performance for years. So if the tectonic plates are shifting under our feet, why are power brokers beginning to brace themselves now?

It’s difficult to identify an all-encompassing answer, but we’ve witnessed a confluence of events in recent years that might shed some light.

For one, the ownership groups of a number of NBA franchises have changed hands, and many of the new guard made their money in innovative, cutting-edge industries that embrace quantitative analysis as essential to their operations. So when an Apple wireless engineer-turned-entrepreneur takes over a team in Memphis, it shouldn’t come as a surprise that he installs an analytics-based strategy in the front office. A similar evolution is underway in Oakland, and if a sale to the Seattle group can be executed, expect the SuperSonics’ new leadership to embody the same spirit.

Second, those who expressed resistance in the past have gained a tolerance -- in certain cases, an appreciation -- for data. A few weeks ago, the head coach of one of the NBA’s last “holdout” organizations from MIT Sloan sat in his office, reviewing a printout of his team’s five-man lineup data. The coach conceded that although the information gleaned from the page wouldn’t necessarily guide all of his substitution decisions, knowing which five guys played well together was inordinately useful because that gave him a new way to think about the collection of players on his roster.

General managers who weren’t aware that such a gathering existed three years ago now fly into Boston to hear graduate students approximate the value of a proficient 3-point shooter. Even those execs who favor the good ol’ fashioned eye test don’t want to cede any advantage to rival teams. If their counterpart is listening to a dissertation about rebounding optics, they’ll have someone in the room, too.

What’s resulted is not just a bigger turnout, but a critical mass. What once looked like a Green Party convention produced on a shoestring at a drab venue now has the production value of a major party convention. Ballrooms are standing room only, the VIP room packed and decision-makers can’t make their way down the corridor without being corralled by an eager kid with a résumé willing to work for a pittance.

For the leaders of the movement, the mass conversions represent a satisfying victory, but one that’s also Pyrrhic. One of the defining characteristics of innovation is its freshness and, for a while at least, its scarcity. But in competitive industries, a novelty becomes commonplace as it's adopted across the sector.

Now everyone is in on the act, and nobody is out of his element.