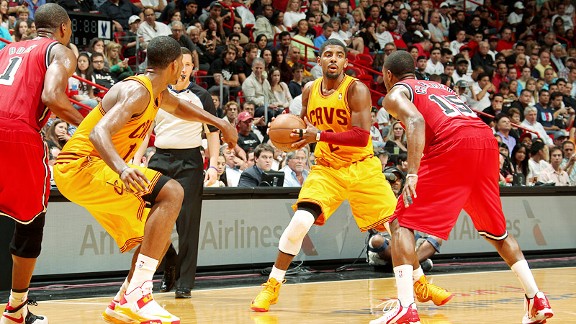 What should Kyrie Irving do next? The next generation of hoops technology could help him with that.Kyrie Irving grabs a deflection at the high post, spins like a top toward the opposing basket and takes off.

As he gallops down the floor, ball bouncing evenly between his right hand and the hardwood, he methodically scans the court; absorbing and processing the discrete bits of information the game offers up to him. Frisking noise for signal. Irving eyes Philadelphia’s Jrue Holiday -- racing just ahead him, 42 inches to his left, far arm outstretched -- and senses two Cavaliers teammates keeping pace alongside and behind him, forming a sort of roving isosceles triangle.

Irving’s eyes dart, rereading the floor, and a familiar pattern begins to emerge -- the various puzzle pieces aligning themselves in ways he’s seen and successfully navigated before.

Holiday, stride for stride, commited to sticking on him. No other 76ers defender in his sightlines. Tristan Thompson on his flank. Something in Thompson’s bearing confirming Irving’s intuition that more help is on the way. Holiday hewing closer to him still.

As Irving crosses midcourt and approaches the 3-point line, he locks eyes with his defender, and the problem of what to do with the basketball suddenly resolves itself. The pattern collapses into a solution. Irving slows slightly and shifts his course a few degrees; from directly toward the basket to somewhere just to its right. The instant Holiday bites, Irving whips a pass behind his back, across the base of the triangle he imagines binding him and his two teammates, and into the expectant hands of Thompson, who immediately turns and shovels it to a trailing Alonzo Gee. Gee finishes with an uncontested dunk.

Watching from the baseline, Irving reflects on the sequence and files it away. Another pattern in his growing database, another experience to draw from. He begins to jog back to the other end to join his teammates …

And then it happens.

Like shaken from a dream, midstride, Irving finds himself somewhere else entirely. Disoriented, he blinks twice and the blur of his new environment coalesces into something familiar. He is on a treadmill in the Cavaliers’ converted film room. When the simulation finishes, it's always jarring.

Irving pauses the exercise device and removes his glasses and headset. The hum of neighboring machines creeps into his awareness. He looks around the room, regarding the other tall men running in place, minds elsewhere. He takes a slug of water, dismounts the treadmill and begins walking across the facility. It's lunchtime.

What separates good basketball players from great ones, and the great from LeBron? It isn’t physical -- at least not in the classic meaning of the word -- but perceptual. While we gawk at the vertical leaps, straight-line speed and superhuman upper torsos of the men who play in the NBA, the most meaningful distinction between them and us is hidden. The brain is the thing.

“You have to have an NBA-expert-level brain to play in the NBA,” said Ben Alamar, an analytics advisor, from a hallway at the MIT Sloan Sports Analytics Conference last weekend in Boston. “When you’re on the court and things are happening, you’re not making decisions. You’re reacting to things that are going to happen five seconds later.”

To underscore his point, Alamar, a professor of sports management at Menlo College in California, pointed to Michael Jordan.

The recognition primed decision model (RPD) represents the best effort of the scientific community to make sense of a how a mind like Jordan’s operates. Herbert Simon, a pioneer in the study of decision-making, described the basic RPD mechanism simply: “The situation has provided a cue; this cue has given the expert access to information stored in memory; and the information provides the answer. Intuition is nothing more and nothing less than recognition.”

It’s not instinct, it’s memory. But for this recognition-based judgment to develop, certain basic conditions have to be met, the most essential being regular practice and feedback. To become an expert pattern recognizer –- a Michael Jordan -- practitioners have to keep at it, and receive immediate information about how they’re doing.

The problem for the NBA is that it doesn’t have a natural way to cultivate this essential RPD-style decision-making expertise in its players. Playing enough NBA basketball to develop peak-level, NBA-specific pattern recognition capabilities is physically impossible. Chess masters generally peak by playing for 10,000 hours, or five hours a day for about six years. A basketball player’s body would crumple under that load. The man who logged the most minutes in NBA history, Kareem Abdul-Jabbar, played only 1,100 hours in his entire career.

There are certainly hardwood geniuses who master through sheer intuition what others can do only by rote memorization, but they come along just a few times every generation. So the salient question for NBA talent development is this: What do you do with those who aren’t savants? How do you imbue a young player with years of experience, and the consequent judgment, without ruining his legs in the process? How do you fine-tune the head while sparing the body? How do you train a brain to be like Mike’s?

Krossover is a New York-based startup that fashions team video into choose-your-own-adventure-style tutorials for players and fans. From a smartphone or a tablet, a pro like Kyrie Irving can watch game film that takes him up to a decisive moment and presents him with a menu of options. On this two-man break, should he shoot or pass? From where or to who? After making his decision, Irving is given immediate feedback on how well, and how quickly, he chose.

Think of it as interactive film. Krossover founder Vasu Kulkarni and Alamar (who is an adviser to the company) say the game can test this kind of hoops IQ, a huge help in projecting who will successfully make the leap from college to the pros. But Krossover also claims it can actually train this basketball intelligence. Though its “sIQ” application is still in its infant stages, Krossover has already sold the technology to two NBA teams.

Kulkarni is not alone. Take Axon Sports, one of the darlings of last year's Sloan conference. The company is already developing sport-specific cognitive training programs and the immersion technologies that will make them fly.

Jason Sherwin, a researcher at Columbia University, delivered a paper at Sloan 2013 outlining the neuromechanics of pitch recognition in baseball players, a process he says has applicability to basketball. Sherwin agrees that the theoretical groundwork for using virtual reality simulators to train athletes is sound. It’s just a matter of getting the finer points of the technology right.

“The problem is having an experimental setup, a training setup, that is ecologically valid for what conditions are going to be like in the game,” Sherwin said. In other words, the simulation needs to feel enough like reality to the player, or mimic it sufficiently, that lessons from the lab translate to the field.

Early adopters have already had success. According to Alamar, the U.S. Olympic volleyball team had an interactive video-training application developed for it. Sherwin added that the military has long had similar interest in simulators that optimize decision-making in theaters of war. Pilots have been using flight simulators for decades now.

The impact of this training, when perfected and adopted on a large scale, will be profound. If what separated Jordan from his peers really was between his ears, then imagine a court of Jordans, all guided by finely calibrated expert brains, methodically, brilliantly picking apart schemes, while the Jordans on the other end adjust on the fly to thwart them. Imagine NBA basketball played, night in and night out, at the highest possible level.

In this way, it’s easy to envisage the future of the sport not as some cold, clinical abstraction -- optimally nutritionally titrated, automatonic players mindlessly executing orders some algorithm spat out -- but as something much more familiar.

A league of men made perfect by practice.