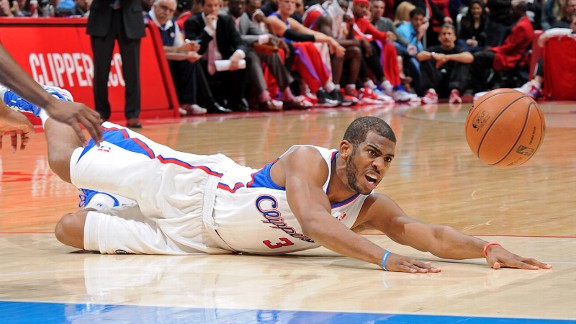 Chris Paul, a candidate for MVP of flopping, hasn't been punished.

The NBA began the season with a new rule against flopping, and the early indications were it made a difference.

Since 2013 began, however, the NBA has cited a mere four flops, out of close to 25,000 minutes of live ball play. Here they are, with video:

Considering that the league issued a total of 12 warnings and fines in the first two months of the season, that could be a sign the rule is doing its job, and players are flopping less.

But on the other hand, it's not that hard to find examples of flops that are going unpunished. A sampling:

Subjective observations suggests that the league, as a whole, on the season, has less flopping. But there's also evidence that the NBA is becoming increasingly lax in its policing.

The playoffs, when flopping rates are usually at their season-high, are just around the corner. Teams value every possession more in the playoffs, and therefore the incentive to flop will be high. And the league's flopping policy has always had the flaw that fines and sanctions are only handed down after the game, so a key flop still might win some team or another a playoff game.

Now seems like the right time to make clear the best game plans should not involve flops.

Also, the way the league has punished flopping has not helped to combat the perception that superstars are largely immune. The biggest name on the list of floppers this season is Tony Parker. Meanwhile the player with one of the greatest flopping reputations, Paul, has gotten off entirely, despite video evidence that he hasn't changed his style much. The league has an excellent opportunity right now to prove stars like Paul can get in flop trouble, too.