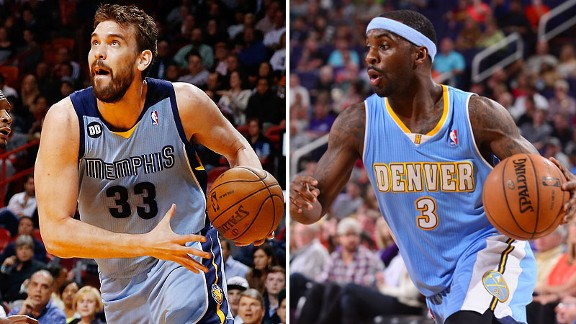 Just as their teams were hitting their strides, Marc Gasol and Ty Lawson went down.For a while, the Memphis Grizzlies were the Western Conference’s most intriguing story. During the height of the season, they dealt their most prolific scorer (Rudy Gay) for a less selfish one (Tayshaun Prince). Following the trade, the Grizzlies cratered for a period, as a malaise infected a somber locker room. But once they incorporated Prince into their defensive schemes and worked out their rotations, the Grizzlies rallied with a fury to win 14 of 15 games.

While Memphis was experiencing its Glasnost, the Denver Nuggets cruised through their schedule like a snowmobile through powder. They ran up 15 straight wins with the NBA’s most improvisational and electric offense, paying tribute to Doug Moe’s “organized chaos” of the early-model Nuggets.

For weeks it appeared the Los Angeles Clippers were a lock to finish in the No. 3 slot, but with Memphis and Denver ripping off wins in bunches, the West’s third seed was put back into play -- and the best race for playoff positioning was under way.

Then, just as the drive for the postseason was becoming scenic, the Grizzlies lost Marc Gasol to an abdominal tear and Denver's Ty Lawson was sidelined with a heel injury. As Gasol watched in street clothes, the Grizzlies fell back to earth. The Grizzlies barely held off at home a Celtics team that hadn’t won a road game since March 6 and dropped a game in ugly fashion at Washington. With Lawson out, Denver stole a game at home against a decimated Sixers squad, squeaked by Sacramento (also in Denver) and was blown out in New Orleans.