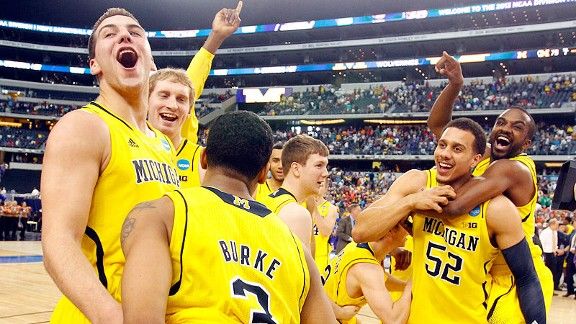 Fans have always embraced the unpredictability of the college game.

Our nation loves the NCAA tournament because it isn’t fair.

Strange as it sounds, the thrill of unfairness is the animating force behind an event so compelling that it convinces millions to voluntarily, excitedly fill out a bracket -- the sports version of filing a tax return.

This year’s cascade of tournament upsets is a reminder of why college basketball titillates its audience while leaving that audience with fewer enduring memories than the NBA bequeaths.

The public loves an upset, that signature moment of nationally televised surprise when a worse team triumphs over a better one. It’s not depicted as the triumph of unfairness because “the little guy” makes for such a sympathetic figure.

It’s hard not to pull for an unheralded senior from Wichita State, after Gonzaga got publicity and acclaim on the Sports Illustrated cover. At the same time, it’s not exactly fair that the worse team (the Shockers) gets to advance after beating the Zags and the Buckeyes of The Ohio State University on a flurry of contested, often fortunate 3-pointers. Wichita State would likely lose most of its games to Gonzaga or Ohio State over the course of a series, but the Shockers are rewarded in an NCAA system predicated on subsidized mediocrity, subsidized surprise.

This love of unfairness is quite ironic because the tournament itself is often framed as a love letter to the virtues of hard work, toughness and perseverance. But when you design a single-elimination playoff system with a field of 68 teams, you’re almost ensuring that random chance will mock all those virtuous sports qualities.

Add high-variance 3-pointer strategies, plus referees that the NCAA has little sway over, and we’re viewing an incredibly inhospitable environment for merit. If you work the hardest and try the hardest, you’re still liable to get kicked out of the dance by some other, worse team’s hot-shooting night. It’s fun for the fan, emboldening for the underdog, but daunting for the elite. In college basketball, even Goliath is David.

The NBA, in contrast, rewards superiority.

One of the pluses of rewarding superiority is that the stories endure. The NBA certainly has a built-in folklore advantage because careers last longer -- we get to know Tim Duncan for a broader span of time as a Spur than as a Demon Deacon. But, beyond career length, the memories last because they reflect a celebration of greatness. Whether we’re discussing regular-season feats like Kobe’s 81 points and Miami’s 27-game win streak or postseason accomplishments such as LeBron’s massive Game 6 in Boston and Dirk Nowitzki’s transcendent 2011 playoffs, we’re commemorating the realization of elite potential.

When somebody like Dirk or LeBron does fall in an upset, that story endures as well. The shocking outcome isn’t contrived via a single-elimination tournament. It’s genuinely surprising that the No. 8-seeded Golden State Warriors bested the No. 1 seed Mavericks over six games because things like this rarely happen, just as the world seemed to shift on its axis when the Mavs upset the Heat in the 2011 Finals.

After the 1990s, parity-drenched college ball has given us precious little to tell our grandkids about. Carmelo Anthony’s Syracuse team has some cultural cachet because Melo was great, a freshman who went all the way. Duke-Butler will be remembered for a variety of reasons, including the half-court would-be game winner that almost fell. Mario Chalmers hit a shot of some renown to help defeat Derrick Rose and cap Rose’s one-and-done experience.

But with few exceptions, the focus is more on a basketball going in than on the process. There are a lot of upsets in the rearview mirror too, but it’s hard to lucidly discuss mediocre teams that got their 15 minutes of fame, years after the fact. The byproduct of “Madness” is that you don’t recall much from chaos and cacophony. We are a long way from John Wooden’s 88-game win streak and the memorable teams involved in it.

Of course, the tournament is as stimulating in the present as it is boring to retroactively consider. The “One Shining Moment” song that caps the tourney conveys a sense that glory is ephemeral, that it exists only as we witness it. This is far different from the debates over legacies that NBA discussion is steeped in. It wouldn’t have made much sense for such a song to burnish LeBron’s 2012 title victory, unless the goal was to shortchange him.

It’s become a cliché to announce a preference for NBA basketball because the level of play is superior. Every reasonable person knows that games are played better in the pros, so college fans tout the “exciting” aspects of upsets. Yes, the tourney is exciting. Yes, it’s fun to follow your bracket through a maze of unpredictability.

But what makes the NBA a superior product, from my perspective, isn't just that its play is superior -- it's that its system rewards superiority. In the NBA, great basketball is ultimately validated -- not conspired against. Because of this, the results matter in a deeper way. Because of this, it’s hard for any self-respecting hard-core basketball fan to prefer the college product.