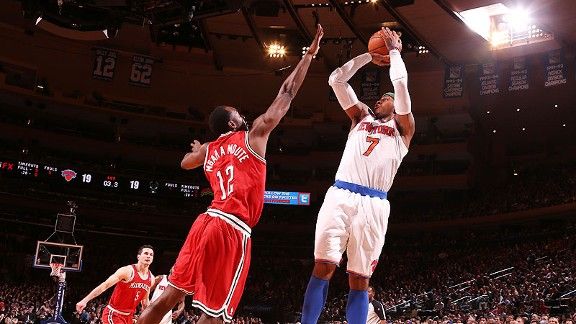 This is the fifth time in franchise history the Knicks have won at least 11 games in a row in a single season. In three of the other four seasons they advanced to the NBA Finals, twice winning the title.

Each of the 11 wins during the streak have come by at least five points, matching the team record for most consecutive wins by five-or-more points set by the 1993-94 team that ended up in the NBA Finals.

Anthony has scored a total of 131 points in his last three games, the most for any player in a three-game span this season.

He has put up at least 40 points in each of the three games, becoming just the second Knick ever to score 40-or-more points in three straight games. The other is Bernard King, who did it in November 1984.

Anthony is shooting 64 percent from at least 15 feet over his last three games, after making less than 40 percent of those shots in his first 59 games.

He is making over 12 shots per game from that distance in that span. How hot is he? No player in the NBA averages more than six made field goals of 15-plus feet per game for the season.

Anthony turned it on in the second half, scoring 29 of his 41 points in the final two quarters.

Race for the scoring title

The race for the NBA scoring title is heating up as a late surge by Carmelo Anthony now has him within five-hundredths of a point of scoring leader Kevin Durant. Anthony is averaging 28.32 points per game, compared to 28.37 for Durant.

If that margin holds up, it would be the closest scoring race in NBA history, just ahead of the .07 points per game lead that George Gervin had over David Thompson in the 1977-78 season.

Carmelo is trying to become the second Knick to lead the league in scoring, joining Bernard King in the 1984-85 season. Durant is seeking his fourth straight scoring title, which would be third longest streak in NBA history behind Michael Jordan and Wilt Chamberlain, who each won seven in a row.