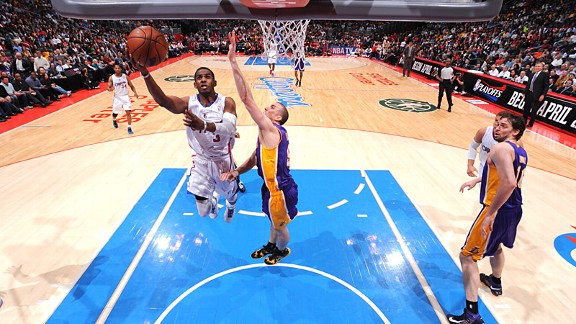 The Lakers' leaky defense put out the welcome mat for Chris Paul and the Clippers.LOS ANGELES -- As rivalry games between the Los Angeles Lakers and Los Angeles Clippers go, Sunday’s tilt at Staples Center on the Clippers’ home court felt less charged. Chris Paul didn’t growl at Pau Gasol for patting his head. Metta World Peace wasn’t in uniform to torment any opponents. And Blake Griffin didn’t posterize any unwitting victims at the rim.

The teams were far more concerned with their respective agendas. For the Lakers, a win was necessary to maintain their hold on the No. 8 seed, while the Clippers are acutely aware they’re in danger of opening the postseason on the road. Those shadows eclipsed any animosity that might have previously existed over head-patting, post-dunk mugging, or bragging rights.

Five thoughts about the Clippers’ steady 109-95 win over the Lakers: