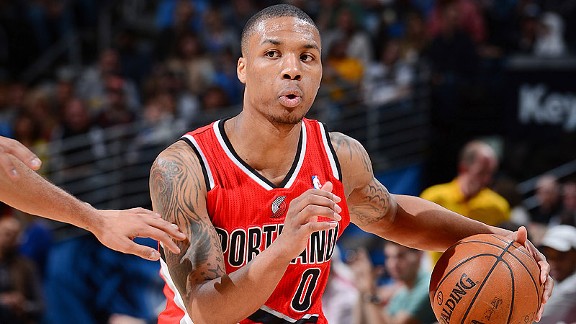 Hell yes I feel the urge to honor that guy, and, as a Blazer fan, to keep him at all costs. Lillard reminds me in different ways of all kinds of amazing young players. One is Kobe Bryant, for perfect work ethic seemingly out of the womb, to pair with unwavering confidence. He reminds me of young Kevin Durant; both were high-scoring Pacific Northwest prospects who basketball people declared to be nearly perfect, even as they posted rookie season PERs barely above the league average. Lillard also has elements of Damon Stoudamire, who did the heavy lifting of bringing hope and buckets as a rookie, all season long, to a team that sorely needed both.

Lillard excels at the things our eyes are best at appreciating -- essentially, highlight scores. He's bad on defense, so-so at seeing the floor and moving without the ball. But those elements of the game aren't exactly putting butts in seats. We tune in for the big makes, and he's a big maker. He is also durable as hell and may well become the first rookie to ever lead the league in minutes played tonight.

Lillard also may have a game that meets the moment. Nowadays referees and the rulebook are generally on the side of protecting high-speed, high-scoring ball-handlers.

I just looked up on Basketball-Reference rookies who, like Lillard, played a lot of minutes and scored a lot of points, but didn't have the highest PERs. I was wondering: Did those guys tend to go on to become much more efficient over time?

And the answer is they almost all had good careers, and especially lately some have been great: Names like Derrick Rose, Stephen Curry, Kevin Durant and Russell Westbrook are on that list.

Lillard might be on that path. Who doesn't enjoy seeing greatness in the making?

Zach Lowe and Kevin Pelton are among the smart, analytics-based guys picking Lillard.

I'm OK with simply stopping the analysis there. Maybe Lillard does what we want rookies to do, period. Maybe we invented the Rookie of the Year award to give to players like him.

That's fine. Give the man his prize.

Well, you read what Ethan Sherwood Strauss had to say about this (Insider) and explain to Anthony Davis what he should have done better.

You're saying, essentially: PER ain't perfect.

Let's talk about John Hollinger's PER for a second. That's the best-known of the many advanced stats where Davis dusts Lillard. Davis has the 15th-best PER in the NBA, up there around with All-Stars. Lillard is 99th, between Pau Gasol's nightmare season and Will Bynum.

I'm not asking you to take PER, or even stats, as gospel. What I know, though, is that it's exceptional for players to make big leaps in PER. So if Davis is way ahead now, even while he's much younger, Lillard is fighting long odds to think he'll catch up or surpass Davis.

I also know there are ways, but only limited ways, to be an amazing player without showing up well in PER (see Shane Battier).

But those things are almost impossible for someone with a game like Lillard's. PER and the box score know scorers like Lillard -- makes, misses, free throws, 3s -- it's all tidily charted. PER's known limitations, in fact, come more on the things where Davis plays:

I've also seen the claim that PER favors big men. This one is tricky, and I'm not sure if it's true. This year's top 10 in PER features eight guards or small forwards and two big men. Certainly Berri's competing measure favors big men far more than PER does. Not to mention: basketball favors big men. There's a reason everyone is bigger in the NBA than at every lesser level of the game.

But that PER omits most defense and omits almost none of a scorer's abilities is irrefutable. That's a stat built to make Lillard look good, which puts Lillard-style players like Westbrook, Dwyane Wade and James Harden in the top 10.

That such a stat is making Lillard look bad compared to Davis is eye-opening.

The real and true evidence-based argument for Lillard would be the sheer weight of his total contributions. Respect the brute power of big numbers! Lillard may not have helped as much per minute, but he helped for about 1,300 more minutes.

All true. And precisely why Hollinger developed a measure called Value Added. This is where you basically take a player's PER and then multiply all that by minutes played.

You can probably see the punchline coming. With fewer than two-thirds of Lillard's time on the court, with a measure that most experts say would favor Lillard's game to his own, Davis still has the better total Value Added on the season. And it's not all that close -- Davis is 35th in the league, Lillard 46th.

If we're talking about which player delivered the most useful work to his team this season, there is no case for Lillard over Davis.

But is that what we're talking about when we talk about Rookie of the Year?