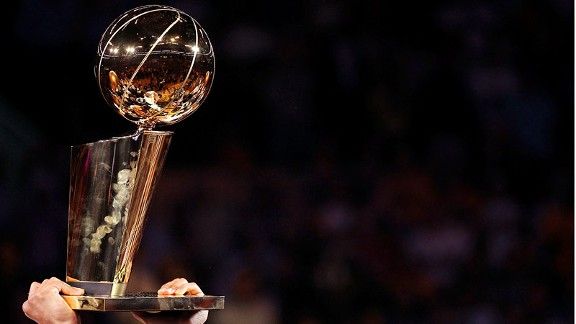 This is what they're playing for.

The NBA playoffs begin this weekend with four games Saturday and four more on Sunday.

Let’s get you ready for the next two months with a list of our top stats to know heading into the postseason.

Heat trends point to a title

The Miami Heat enter the playoffs as the unquestioned favorites and will look to become back-to-back champions.

Only five NBA franchises have ever pulled off a repeat championship: the Celtics, Lakers, Bulls, Rockets and Pistons. LeBron James, the runaway MVP favorite, can also be the first player with MVP and NBA titles in back-to-back seasons since Michael Jordan’s first two titles in 1991 and 1992.

Of the 12 previous squads to win 66 or more games in the NBA regular season, nine went on to win the championship that season.

The Heat finished with the third-best winning percentage by a defending NBA champion in league history, trailing only two of Michael Jordan's Bulls' teams from the 1990s and ahead of two of Bill Russell's Celtics' teams from the 1960s.

Each of those four other teams went on to defend the title successfully, a goal the Heat hope to accomplish over the next several weeks.

In the Tim Duncan and Kobe Bryant eras for each franchise, the Lakers and Spurs have met in the playoff six times.

This is the first time during those eras that the teams are meeting in the first round. And we could see something else new this year -- none of those series lasted seven games.

The Spurs will be making their 16th consecutive postseason appearance, the longest active streak in the NBA.

Duncan, Tony Parker and Manu Ginobili will be making their 11th straight postseason appearance as teammates.

This marks the sixth straight playoff appearance for the Celtics. In each of their previous five appearances, they advanced past the first round. The Knicks, meanwhile, haven’t won a playoff series since 2000. New York is 3-15 in its past four playoff appearances.

Carmelo Anthony’s teams are just 2-9 in playoff series, both of those wins coming in 2009 when the Nuggets made it to the Western Conference finals before losing to the Lakers in six games. Anthony is 1-8 in playoff games in his Knicks career.

The only other active coach who has won a title is Rick Carlisle, whose Mavericks missed the playoffs this season.

How important is Game 1 in the first round of the NBA playoffs? The Elias Sports Bureau tells us that since the first round was expanded to a best-of-seven format in 2003, the team that won Game 1 went on to win 61 of 80 series (76 percent).