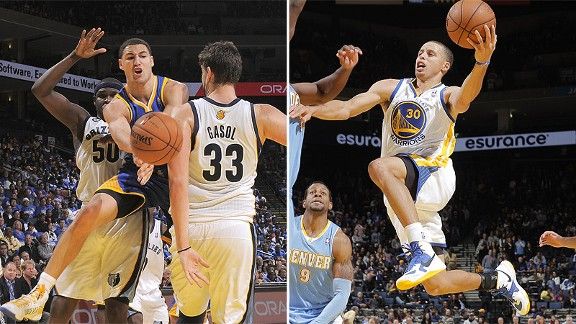 Klay Thompson and Steph Curry both made over 200 3-pointers this season.

"We are a very good shooting basketball team. We've got guys that can knock down shots. You talk about Klay Thompson and Steph Curry, in my opinion, they're the greatest shooting backcourt in the history of the game."

Let’s take a look at whether there is any truth to this quote.

Curry and Thompson are the best

If Jackson was referring to three-point shooting, he may be accurate. Stephen Curry and Klay Thompson combined to hit 483 three-pointers this season, the most all-time dating back to when the three-point line was instituted in 1979-80.

Curry averaged a career-high 22.9 points this season, seventh most in the NBA. He set the NBA record for a single season with 272 three-pointers (Ray Allen previously held the record with 269 in 2005-06).

Curry shot 45.3 percent from behind the arc for the season, becoming the second player in NBA history to make more than 45 percent of his shots from beyond the arc in a single season (minimum 200 attempts).

Thompson ranked third on the Warriors in scoring with 16.6 points per game. Despite only shooting 42 percent from the field, Thompson connected on 40 percent of his shots from three-point range. He made 211 three-pointers, third-most in the NBA behind Curry and Ryan Anderson (213).

The Warriors had the most prolific set of guards in the NBA, getting a league-leading 39.3 points per game from their starting backcourt (which included 82 starts from Thompson, 78 starts from Curry and 4 starts from other players).

Despite the accolades and accomplishments by the young duo, there is an argument to be made against Curry and Thompson as the greatest shooting backcourt in the history of the game.