The other day, I heard somebody say that now that Terry Porter had taken over in Phoenix, the team had at least solved its defensive problems, but they still had to figure things out on offense. Amare Stoudemire famously said that in all D'Antoni's time in Phoenix, the team never really worked on defense. I just got an e-mail from a Cleveland fan saying that of course LeBron James would never go to New York, because defense wins championships, and D'Antoni's teams can't play defense.

And, if you look at points allowed per game, D'Antoni's teams have allowed, in recent seasons, astronomically high numbers like 103, 105, or (the Knicks right now) 108 points per game.

So, the cruddy circumstantial evidence is clear: Mike D'Antoni's teams are no good at defense.

But if he's terrible, then half the league is abysmal. Because the truth is that he's in the middle of the pack.

How do I know this?

Points Allowed Per Possession
First of all, let's pretend that something crazy happened, and NBA rules changed such that in the Eastern Conference there was a new shot clock that lasted just 12 seconds. The West, in this crazy analogy, kept the 24-second clock.

Of course, teams in the East would suddenly have far more possessions per game, and far more field goal attempts. I don't know if they'd shoot a better or worse percentage, but they'd shoot a lot more, and that would raise all their scores. 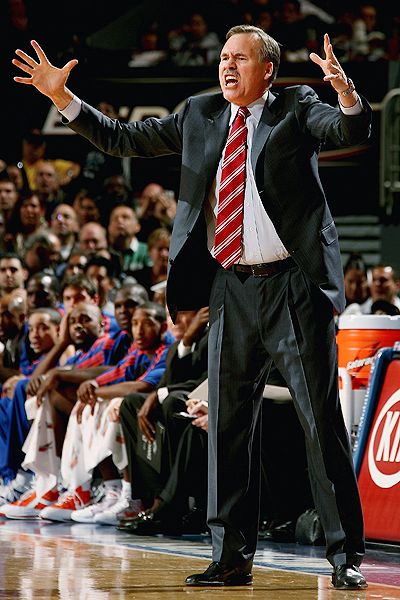 Would all the coaches in the East suddenly become much worse at coaching defense? In reality, no. But if you judge by points allowed per game, clearly. In this world, if you were to stack up all the NBA coaches by points allowed per game, and rank them, the Western coaches would look really good, and the Eastern coaches would look really bad. Which would be wholly misleading, and useless information.

That's also what happens when you look at Mike D'Antoni teams. He coaches a style where his team has the ball for a very short amount of time before shooting. ("Seven Seconds or Less," right?) That means the other team gets the ball many more times per game, too. He is, essentially, coaching in that mythical Eastern Conference, where teams are shooting way more. So his numbers suffer, in appearance, at least.

How does all that shake out? To really know, you'd have to look at how teams fared against his team's defense. There is a lot to look at when assessing any defense. How many 3-pointers do opponents shoot, and at what rate do they make them? How often do D'Antoni teams foul? Do they give up a lot of points in the paint? What about blocking shots and rebounding? Do they gamble for steals? Do opponents get a lot of assists? Do they draw offensive fouls? How about weakside help, containing the pick and roll, and scaring little guards from attacking the rim? Not to mention, with D'Antoni teams you also have wonder about stuff like: Does all the running make them tired and miss more shots? Does it make opponents go deeper into their bench, and play lower-quality players? Does all the running make other teams feel like running, too -- even though that style might not suit them?

You could research all that stuff if you wanted to. And there may be good reason to. But if you wanted a quick way to rate the defense of Mike D'Antoni's teams, or any coach, I would advise you do this: Add up the number of points his opponents have scored all season, and divide it by the number of possessions they have had. It's beautiful, right? It factors in everything above -- every miss or make, every foul, every blocked shot -- in a real world setting. It tells you, essentially, if your team has the ball, and D'Antoni's team is playing D, how many points are you likely to score before his team gets the ball back.

Other defensive stats might tell you more about how such a thing happens. But this statistic is surely king when it comes to quickly telling you which team is the best at stopping people.

Mike D'Antoni's Defensive Track Record
Mike D'Antoni has won a lot of games, and after many wins has pointed out that his team played the best defense of the two teams that night. It's a cute line, and hard to argue. But that argument over the entire season is worth knowing. Who did play the better D? D'Antoni's team or the rest of the league?

The truth is, it's close. Judging by points allowed per possession (often also expressed as points per 100 possessions, as on Basketball-Reference.com where I got all these numbers, because that's a more intuitive number), D'Antoni's career as a coach of defenses looks like this:

The other really important thing to note: In D'Antoni's last season in Phoenix, his team allowed 105 points per game. This season under Terry Porter, they allow 103 points per game.

That has been taken, in some quarters, as defensive improvement. Yet the team has gone from 16th most efficient on defense to 26th! This team is playing at a slower pace. But it is not playing better defense. In fact, you can see the story of this Suns season as one of new-found defensive catastrophe. (The team's offense is still pretty good: fourth most efficient.)

No, He's Not Gregg Popovich
But Mike D'Antoni is also not the worst defensive coach in the NBA. Not by a long shot. You start telling me how bad he is at coaching defense, and I'll start telling you who has been worse (at the moment, Terry Porter, Lawrence Frank, Don Nelson, etc.) through the years.

To me the best numbers out there show that Mike D'Antoni has a history of taking gifted offensive players, and making them into an average NBA defense. That's no small feat, and has the potential to one day be the kind of coaching job that results in a ring.