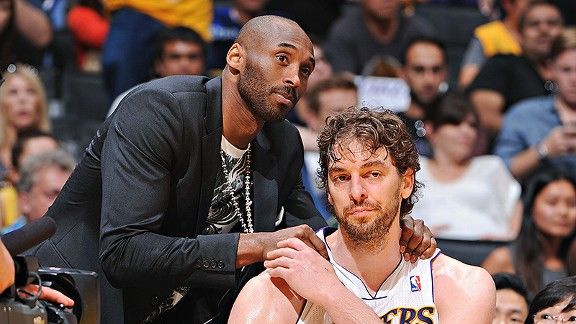 Kobe Bryant and Pau Gasol wonder what could have been as time runs out on the Lakers' season.

How bad was it for the Los Angeles Lakers in their first-round series sweep?

Let us count the ways, with significant help from the Elias Sports Bureau.

• The San Antonio Spurs outscored the Lakers by 18.8 points per game in their four-game sweep. Elias tells us that is tied for the fourth-largest points per game differential in a best-of-seven series in NBA history and the worst by the Lakers in franchise history.

The biggest in any series was 25.3 points in a four-game sweep by the Orlando Magic over the Atlanta Hawks in the 2010 Eastern Conference semis.

• The Lakers have now lost six straight playoff games dating back to last season. That matches the longest playoff losing streak in franchise history. They previously lost six in a row from 1973 to 1974 and 1991 to 1992.

• Dating back to his stints with the Suns and Knicks, Mike D’Antoni is 1-14 in his last 15 playoff games as head coach. Elias says the only other coach in league history to lose 14 of 15 in the postseason is current NBA broadcaster Mike Fratello. His worst span was losing 16 of 17 from 1995 to 2006 while with the Cavaliers and Grizzlies.

• The Lakers lost the final two games of their series against the Spurs by 31 and 21 points, respectively. In doing so, they became just the second team in NBA history to lose consecutive home playoff games by at least 20 points, joining the Miami Heat who did so against the Hornets in the 2001 first round.

• Since the playoffs expanded to eight teams per conference in 1983-84, the Lakers are now 0-5 in playoff series as the 7 or 8 seed. It should come as little surprise that they struggled against the 2-seed Spurs as the Lakers went 4-14 during the regular season against the top five seeds in the Western Conference including a 1-2 mark against San Antonio.

• The Lakers’ stars struggled with injuries for much of the season and it all came to a head on April 12 when Kobe Bryant was lost for the season with a torn Achilles. When they did have Bryant, Steve Nash, Pau Gasol, and Dwight Howard in the lineup together, they went 8-14 in 22 games.

• Additionally, the Lakers’ expected starting five of Nash, Bryant, Gasol, Howard and Metta World Peace played only 189 minutes and 11 seconds together - just 4.8 percent of the team's total minutes played during the regular season.