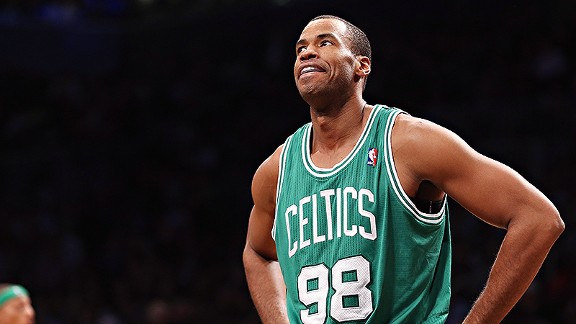 Were we "ready" for Jason Collins? In the end, it didn't really matter.

"No one wants to live in fear. I've always been scared of saying the wrong thing. I don't sleep well. I never have. But each time I tell another person, I feel stronger and sleep a little more soundly. It takes an enormous amount of energy to guard such a big secret. I've endured years of misery and gone to enormous lengths to live a lie. I was certain that my world would fall apart if anyone knew. And yet when I acknowledged my sexuality I felt whole for the first time."

Everything has changed, yet it all seems so self-evident when you break it down. In which workplace, family, school or community would we not want someone to feel like the best version of himself and committed to his well-being? What benefit is derived from imposing what Metta World Peace aptly referred to as “unnecessary stress” on another person? How is basketball, sports, or the larger world better when we have people like Jason Collins enduring misery, sleeping poorly and expending precious energy guarding secrets? We shouldn’t wait for everyone to be ready before we create the environment for a guy like Collins to thrive -- we should get ready.

This is why the “readiness” canard never rang true to me. The world is never completely ready for change, and there are some in the NBA today expressing ambivalence about Collins’ announcement. Those voices won’t be the last. The next time Collins sets a screen in front of 18,000 people, it’s a fair bet that a couple of them will be angry. There will be players who grumble privately that Collins’ admission makes life a little more awkward for them.

There’s going to be a serious temptation in the next few days to dwell on the commentary of those who are least comfortable with Collins’ decision, but let’s not. We should offer clarity where it’s lacking and perspective where there isn’t any, but this has always been a conversation that’s strongest when it’s forward-looking, not reactive. Present resistance isn’t nearly as profound as future potential. Pretty soon, just about everyone will get over it because that’s what progress is -- the collective act of getting over it.

I still can’t figure out if Collins' coming out is a “where were you when it happened” moment. When I first learned about Collins I was banging out some thoughts and impressions about the Clippers-Grizzlies first-round playoff series for a column. Before Game 4 in Memphis, I witnessed an amusing scene in the Grizzlies locker room, which was empty except for Zach Randolph and Tony Allen sitting at their lockers. Allen was playfully lecturing Z-Bo about the nuances of help defense and the job of the big man in a defensive rotation. Z-Bo smiled, knowing everything Allen was saying was correct. Then, shaking his head, he said, “The big man can never win.”

It was one of those snapshots when players reveal not only something about their approach to the craft but also a bit of who they are as people. Those are the moments you live for when you cover a sport, when the characters become fuller and the images become brighter -- when athletes become real people.

That’s all this conversation about openly gay athletes has ever been about it, our collective willingness to afford them the dignity of self-expression. A human being simply can’t live in fear of his or her own identity. Anyone who has could tell you how torturous it is. Jason Collins understood that, and that realization fueled his decision to come out as an openly gay man on Monday.

Collins called coming out “the right thing.” Some of that is a political imperative, but more than anything, Collins made a quality-of-life decision, just as did Golden State executive Rick Welts and anyone else who’s opted, as Collins wrote, to be whole. That means taking all of the different fragments in life -- work, family, friends, passions, maybe school or worship -- and bringing them together and becoming a complete person.

Sports was one of the last places in American public life where that was impossible, but Collins has righted that.