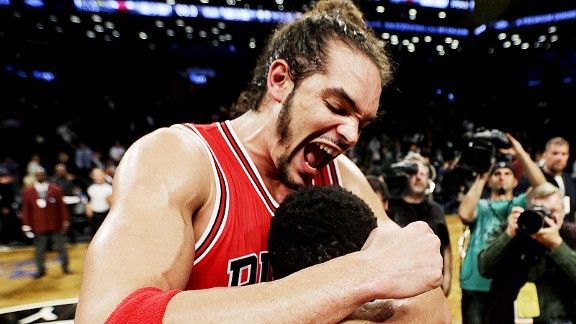 Joakim Noah came up huge for the Bulls as they eliminate the Nets in Game 7For the first time since Michael Jordan’s shot over Craig Ehlo in Game 5 of the 1989 Eastern Conference First Round, the Chicago Bulls won a “winner-take-all” game on the road. It is the first time the Bulls won a Game 7 on the road in franchise history going 0-6 previously.

The Brooklyn Nets failed in their attempt to become the ninth team in NBA history to win a series after falling behind three games to one. The Nets fall to 0-2 all-time in Game 7s and have not won a playoff series since 2007.

What went right for Bulls?

Joakim Noah talked the talk and then walked the walk. After Chicago’s Game 6 loss Noah said, “We're going to go into a hostile environment in Brooklyn and we're going to win."

Noah made certain of that with 24 points, 14 rebounds and six blocks. Considering his foot injury, it was a heroic and historic performance. Read on for more on where that stat line stands among the all-time greats below.

Noah had a series high 1.33 points per play and shot 71 percent from the field Saturday.

With Kirk Hinrich out, Marco Belinelli and Jimmy Butler came up big. Belinelli poured in a playoff career-high 24 points. Butler played the entire game and was stellar defensively – holding Deron Williams to 4-11 FG and Joe Johnson to 0-5 FG when they were matched up.

What went wrong for Nets?

The Nets never led in the game - trailing by as many as 17 points, but they were able to cut the deficit to single-digits for most of the last quarter-and-a-half.

Johnson’s struggles were part of the reason Brooklyn couldn’t complete the comeback. After an alley-oop dunk at the 6:37 mark in third, he missed his last seven shots of the game, six of them coming from beyond the arc.

Noah became the first player with at least 20 points, 10 rebounds and five blocks in a Game 7 win since Kevin Garnett in 2004. In fact since blocks became official in 1973-74 the only ones to reach those numbers in a Game 7 win besides Noah and Garnett are Dikembe Mutombo, Patrick Ewing and Elvin Hayes.