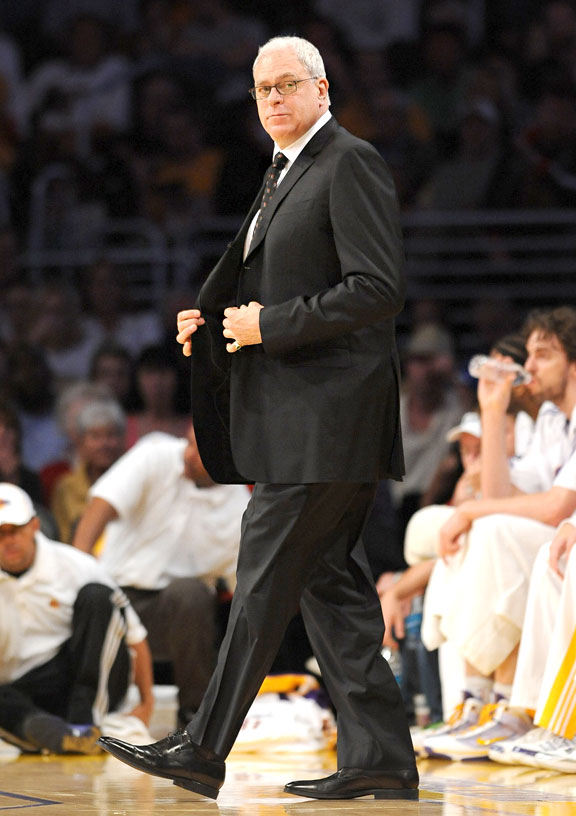 Phil Jackson says this is not the game Dr. James Naismith envisioned.A year and a half into HoopIdea, our motto, more than ever:

“Basketball is the best game ever. Now let’s make it better.”

The fun comes from the fact that this is at once both a radical position and a no-brainer.

Not even this game is perfect. Once you get over the sting of that, though, as a basketball fan, of course you know it’s true. Nothing is perfect. We all get that. Phil Jackson gets that.

At the inception of bball the player who fouled also had to go out just like hockey. The evolution of the game brought in the foul shot.

If fouling is against the premise of the game there is a way to eliminate it. Use of designated shooter from 5 players on court like a tech

The conversation is happening. It’s not just HoopIdea making it happen. It’s Jeff Van Gundy, Phil Jackson, Bill Simmons. And it’s fans, fans and more fans. As soon as HoopIdea opened the door to the conversation about how the game could be better, fans streamed in with thousands of ideas and emails supporting the effort.

The NBA itself has weighed in extensively, mostly in quiet conversations. And even if the league hasn’t enacted every change it could, league officials have been thoughtful and open to discussing how to improve the game. They get it.

As NBA fans, we can have whatever game we want. The more we examine the game and talk about it, the more it becomes clear where the NBA’s focus should be -- on basketball.

When the NBA gets it wrong, that’s because something is standing between the best players in the world and the best game in the world.

There’s a long list of things NBA players do better than anyone in the world. Handling the ball, stealing it, blocking it into the third row, working together in delightful and synchronous ways and, most of all, inventing more and better ways to score, from near and far.

The NBA is ready to act

The engines of change are fired up. The competition committee that was once a famously backward and ineffective collection of 30 bored or agenda-driven team reps is now a lean collection of 10 at least fairly forward thinkers.

HoopIdea has touched a ton of different parts of the game, such as tanking, the schedule and concussion prevention and care.

And some of the changes we have been pushing for have found success.

We heard from readers that flopping was a top annoyance, so we went all-in. We launched Flop of the Night as part of a nearly 100-post multimedia campaign on TrueHoop, joining Van Gundy and others who had long called for a flop ban. And boom, presto, a few months later the NBA created not just a new rule against flopping but also a new, more nimble competition committee to handle such suggestions in the future. When I asked David Stern why he addressed flopping now, of all times, he said, “It’s something that’s been building. There has been a lot of comment about it.” It was a team effort, but we’ll chalk it up as a HoopIdea W.

This was forerunner of HoopIdea, which showed the NBA could be nimble in making the game better. In a nutshell, TrueHoop said nobody, including NBA referees, seemed to understand the NBA’s ambiguous traveling rule. So the league changed the rule to make it crystal clear. Hats off to the NBA for that.

The NBA has long banned performance-enhancing drugs. But HoopIdea found its testing has fallen well behind the state of the art. Real change has not yet come, but it’s close, with the first NBA blood tests -- these ones for human growth hormone -- expected as soon as next season.

SPEED UP THE GAME

This was the original HoopIdea -- what’s with all the delays? Too much dead-ball time. It’s still a problem, but how gratifying to hear from NBA vice president of basketball operations Stu Jackson, about five minutes into this February video, that “not having wasted time” is the first of his office’s priorities moving forward.

The NBA has always gotten almost everything right. When it gets it wrong, it’s because the focus strays from the best players in the world playing the best game in the world.

In those tweets above, he's saying he sees too much intentional fouling.

Mostly they foul because, sing it with me, it’s HoopIdea’s anti-theme: “This is the way we have always done it.”

It robs us of real basketball a dozen times a game, at least.

A scene from the end of the first half of Game 5 between the Pacers and Knicks: The Pacers inbound from the far baseline, and we, as fans, are due for something. The ball is in the middle of the floor, the seconds on the clock are down to 2.8.

Ten amazing, creative, brilliant players are on the move, with three seconds to cook something up. It’s mathematically impossible we won’t get a 3 or a dunk or a lob or something. Best of all, for us as fans, we know the defense isn’t set, so whatever shot arrives will likely have a good chance.

Time for some NBA basketball

David West plays quarterback, lobbing a pass over the middle to Lance Stephenson, who jumps like a wide receiver, eyes behind him on the oncoming ball.

What he doesn’t see is Tyson Chandler running at him with a head of steam and the profoundly unfair advantage of two feet on the ground. Stephenson makes the catch; Chandler makes the hit. Stephenson looks like he has been shot. The explosion is so great that 228 pounds of Stephenson instantly reverse course; he was flying toward the Pacers hoop, now he’s moving in the opposite direction. From midcourt he ends up writhing on the ground just by the NBA Playoffs logo on the Madison Square Garden floor.

Chandler, who had concussed another Pacer, George Hill, a game earlier and sent Stephenson dangerously to the floor not three minutes earlier, would surely be punished for this dangerous high-speed collision. Surely the rules are against Chandler for risking injury and erasing the kind of beautiful moment that keep fans tuning in?

Not exactly. In fact, as both an athletic open-court finisher and a poor free throw shooter, Stephenson is among the NBA’s most commonly mauled players. The math of fouling him hard is good.

As predicted by his career 64 percent free throw shooting, Stephenson made just one of two, meaning the Knicks went from fearing giving up two or three points to giving up one and getting the ball back with 2.4 seconds on the clock. And for good measure, Stephenson had some thinking to do about his personal safety.

The Knicks lobbed their own long pass to a streaking athlete, J.R. Smith, who has a habit of making memories, good or bad. But before Smith could properly contain the ball, let alone activate his thrilling shooter’s motion, here comes Sam Young with an intentional foul of his own.

Minutes had passed. There were substitutions by the half-dozen. Smith shot his three free throws, making two. The Knicks started the last three seconds without the ball but were now plus-one after committing one of the most dangerous intentional fouls of the week.

Four-tenths of a second had ticked off the clock.

Score one, or two, for shenanigans.

The Pacers inbounded once again and missed a 70-footer.

Through it all, we got a lot of process, some video reviews, five boring free throws, plenty of standing around, a forest of intentional fouls and not one second of anything that resembles your pickup game -- you know, the game where five players honestly try to use artistry and athleticism to score over or around five players who are honestly trying to stop them.

Why can’t they just play basketball?

Why must we tolerate all those risky intentional fouls, delays and lack of artistry?

The NBA has, in recent years, increased penalties to protect players who are shooting 3-pointers or who have a “clear path.”

Time to make a similar update for players who have a full head of steam headed for a layup or dunk.

There are plenty of options:

There are no obstacles, however. The instant the NBA decides it doesn’t like the look of those plays, this game can be far better. The competition committee meets next week.