Blogging the Lakers isn't easy. The team dominates the sports scene of the nation's second-largest market. The Lakers revel in the media circus, and feed their suitors a constant stream of intrigue to keep everyone entertained. It's easy to forget that when you cut through the noise, the Lakers play beautiful basketball within a graceful system.

For those who want to follow Lakers' basketball -- not the psychodrama, the theatrics, or even the mystique -- Kurt Helin of Forum Blue & Gold is your guide. There are countless outlets in Los Angeles that cover the Lakers. Kurt is one of the few who covers the game. He's been doing it since 2004, making him one of the early basketball bloggers.

What are you doing with a sports blog?
I thought there would be groupies. Who knew sitting in front of a computer all day was not going to attract throngs of women?

I just started this on a lark as a little hobby. I never envisioned what it has grown into. But, I am having more fun watching a sport I love because I can share and debate thoughts with a host of smart, creative people. That's good enough for me.

What, to you, is the point of a sports blog?
It's the modern equivalent of a conversation about sports that a generation ago took place around the corner of the local bar. My goal is to start that conversation -- and for a long time I was talking to myself. People may think of blogs as a one-sided diatribe, but I always wanted what I wrote in a post to be the starting point of a discussion. I've been fortunate to have a lot of smart, creative, hoops-savvy people find this little bar and join in the conversation. 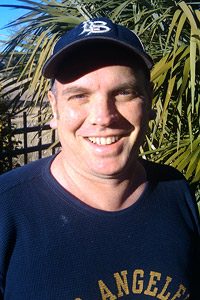 I should add that I've had all sorts of conversations in my actual neighborhood bar -- from the long-term ramifications of the CIA's policies in Central America in the 50s to Jessica Alba or Scarlett Johansson. Blogs, even basketball blogs, are the same way. There are the serious and analytical and the silly and superficial (sometimes all in the same blog). Often you will hear people or older media members say "the bloggers are saying..." or try to lump all blogs into one group.

But that's as big a mistake as putting all newspaper columnists or team beat writers in the same category -- there is a variety of styles and levels of quality. There needs to be more awareness of that diversity in blogs.

You and I once discussed that, as a sports blog gets more and more exposure, there's often a tendency for the blogger to "tighten up" and become less personal as a writer. How do we remedy that?
I'm struggling with that now. As my blog grew into a site more known for sober perspectives and Xs and Os breakdowns, my writing has lost some of its personal flair. I'd like to think the problem can be solved by drinking more beer, but I'd like to think all problems can be solved by drinking more beer. Homer Simpson said it best: "Alcohol, the cause of, and solution to, all of life's problems."

More personal writing is something that just needs to flow. It can't be forced or it feels awkward. I think all writers are trying to get things to flow more freely. If James Joyce struggled with this, I'm not sure I can find a magical answer. So, I just keep plugging along and trying. With the occasional beer thrown in.

During the Kobe Bryant drama in the spring of 2007, when it looked like he wasn't long for the Lakers, you wrote a post titled "Sick & Tired," in which you publicly questioned why you blogged about the Lakers and announced you were taking a break. Was that a cathartic moment for you?
It was cathartic for me personally, but it also was a defining moment for Forum Blue & Gold -- in that the comments and in e-mails I got after that post, there was a lot of support for my position. More than ever, I realized that I wasn't the only Lakers fan that has no stomach for the soap opera that surrounds the team. And, as a blogger, I don't need to deal with it.

Talking about Kobe and Shaq still gets ratings on radio and I know there are newspaper editors still asking for that angle. And while radio hosts needed it to drag out the drama to keep their ratings up and newspapers needed people to pay fifty cents at the newsstand, I don't.

I was reminded I needed to be me and be honest.

The response to that post gave me a lot of confidence to just keep doing what I wanted to do and know that there were people with me.

All over the web, Kobe Bryant's fans are famous for savaging anyone who criticizes him, and for blindly endorsing all who praise him. The passion is admirable, but not in step with the kind of sober analysis you do on your site. You have any special methods of toning down the most hyperbolic of Kobe's fans?
It's called the delete button. I am more than willing to be a dictator on the site to keep the discussion civil and of quality. I like to think of myself as a benevolent dictator, but then again Stalin probably liked to think of himself that same way.

This sort of ties to what I said in the last question: I feel a freedom to set the ground rules that I want for my blog because there are others that want this level of discussion. I honestly don't check all that often to see how many hits the site gets. That's not how I judge success. I judge it by how much I am enjoying the conversation. To that end, if Kobe gets criticized (and he does) you are welcome to defend him, but you better have a quality argument with facts formed into complete sentences. Just write "KOBE RULZ!!" and your comment is deleted. I don't have the need or obligation to draw the biggest audience (well, I should have told Henry this before he took me into this network I guess), just the right audience.

You recently shared in a post that, as a kid, you went to John Wooden's Basketball Camps. What was that experience like?
It is one of the fondest memories of my childhood, I went for two straight summers. First is all the fun that comes with making friends at a camp -- playing practical jokes like putting pepper on the guy to your right's Corn Flakes at breakfast. Plus we got to meet famous players. I remember Swen Nater speaking to us and during the talk just reaching up and grabbing the net, casually like you or I might grab a glass off a shelf. He stood there holding the net, and at that point he could have told the 100 of us fifth graders the magic secret to becoming an NBA player and we would have missed it because we were in awe. We had no idea a human being could be that tall and long.

But like a lot of people who came in contact with John Wooden, it was years before I realized the lessons that he was trying to (and successfully) teaching me. I thought I was just playing hoops. The first day of camp you spent time learning how to properly put on your socks and shoes. Sounds silly, but how many players do you know from rec league games who get blisters from doing it wrong? It was about details and preparation, about doing things right the first time, a lesson I still try to apply today.

All the time I find myself saying "be quick, don't hurry" or "never mistake activity for achievement." A lot of thing
s from that camp stick with me to this day.

There are Civil War references all over Forum Blue & Gold. How does someone who grows up in Southern California develop that fascination? Do you participate in re-enactments?
Nah, not even close. I'm just one of those guys who after graduating from college went back and read all the books I took tests on but never read when I was supposed to. Same with getting interested in history. And really, there is nothing quite as interesting to me in American history as the Civil War. So I like reading about it.

But I'm a basketball geek, not a Civil War geek.