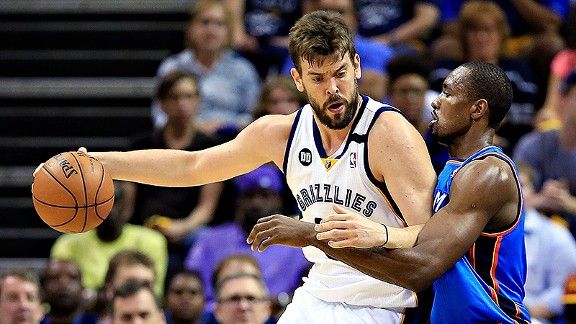 Marc Gasol's post-up success could be vital to the Grizzlies' chances.

The San Antonio Spurs will host the Memphis Grizzlies in Game 1 of the Western Conference Finals Sunday at 3:30 p.m. ET on ABC.

When considering all the different matchups that this series has to offer, one of the interesting ones features a pair of Olympian centers in Marc Gasol and Tiago Splitter.

Let’s shine the statistical spotlight on them and how they impact that which their team does best.

The Grizzlies have dominated inside, where they’ve scored an NBA-high 221 points in post-up plays this postseason.

Gasol, who won the 2012-13 Kia NBA Defensive Player of the Year award, has also made his mark on the offensive end. The fifth-year center is averaging a career postseason-high 18.3 points, up from 14.1 points per game during the regular season.

Gasol’s emergence on offense has been primarily due to his success in the post. He’s recorded an NBA-high 1.16 points per play on post-ups and his 103 points total on post-ups trails only teammate Zach Randolph this postseason.

For the Spurs, one way to contain Gasol in the post is to force the ball out of his hands. Despite Gasol’s dominance in creating his own offense in that play, the Grizzlies have struggled on his passes out of the post.

The Grizzlies offense averages just 0.59 points per play off Gasol’s passes out of the post, the third-lowest scoring rate by a team off a single player’s passes from the post this postseason.

Splitter a hidden key in the pick-and-roll

Along with having one of the best scoring guards off the pick-and-roll in Tony Parker, the Spurs have a secret weapon -- a player who has been extremely effective and efficient in the pick-and-roll these playoffs.

The Spurs’ third-year center has played a key role in giving the Spurs another threat in that offense between the ball-handler and the roll man.

Splitter has been the most efficient finisher in that offense this postseason, scoring at a rate at 1.56 points per play and making 10-of-11 shots from the field,

His points per play and field goal percentage are both NBA highs this postseason, albeit with that small sample.

Gregg Popovich has used Splitter in that play type. Splitter has been the pick-and-roll man a team-high 31 percent of his total plays this postseason, his highest rate of any play type. That total is up a little bit from 24 percent in the regular season.

The Grizzlies can make Splitter a non-factor in this series by forcing him in other areas on the court. Of Splitter’s 47 total points scored this postseason, 25 of them have come finishing the pick-and-roll.

In other play types, Splitter has averaged only 0.61 points per play on just 7-for-22 shooting.