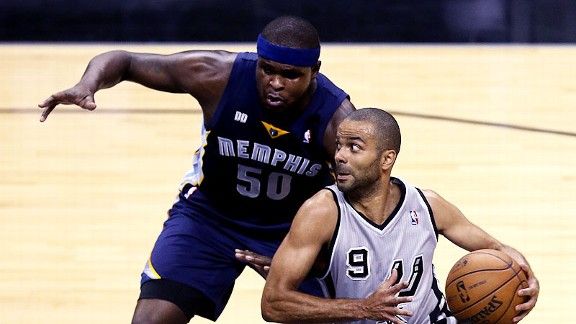 The Spurs made a franchise-record 14 three-pointers and limited Zach Randolph to two points.

The San Antonio Spurs didn't yield a point to Zach Randolph until there was 9:26 left on the clock in the fourth quarter. By that point, the Spurs already had an 18-point lead.

So it went for Randolph, who entered the game leading the Memphis Grizzlies in scoring this postseason with 19.7 points per game.

Randolph finished with two points, a playoff career low in games where he played at least 10 minutes.

The Spurs limited him to just 11 offensive touches. ESPN Stats & Info video tracking defined those as "touches on the offensive end of the floor," including offensive rebounds.

What's more, only two of Randolph's 11 offensive touches came in a post-up situation. Entering the game the Grizzlies led the NBA in scoring from post-ups this postseason with 221 points (20.1 per game).

The Spurs set a franchise playoff record by hitting 14 three-pointers in the game.

And in what must make Gregg Popovich happy, all 14 of the Spurs three-pointers were assisted.

Now the Grizzlies are looking at 1-0 deficit against a coach that has won more than 120 playoff games and four championships.

Gregg Popovich is 19-3 all-time in best-of-seven playoff series when his team wins Game 1. His .864 series win percentage after Game 1 wins ranks only behind Phil Jackson and Red Auerbach among head coaches with 15 postseason series worth of experience all-time.