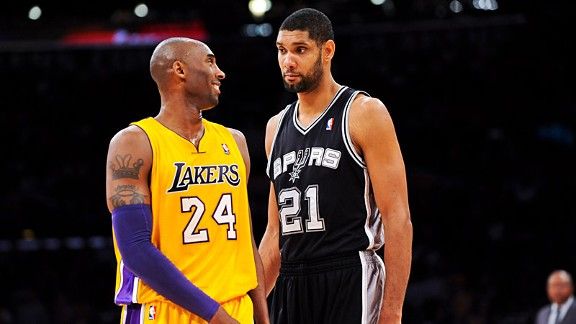 Kobe Bryant gets most of the attention, but Tim Duncan's career stacks up well with the Laker legend.Of the players in the post-Jordan era of the NBA, it’s a fair argument that Tim Duncan and Kobe Bryant are two of the most accomplished individuals. While LeBron James will no doubt be a part of this discussion once his career is near its end, he has not yet built up a statistical resume quite as hefty as Duncan or Bryant.

Bryant is without question the more prolific scorer, averaging five more points for his career than Duncan. However, Duncan won two regular season MVPs (2001-02, 02-03), while Bryant has just one (2007-08). They were in direct competition for Duncan’s MVP awards also, as Bryant finished fifth and third respectively in the MVP voting for Duncan’s two MVP seasons.

While Duncan has a better percentage from the field for his career, Bryant has bested him by one in All-Star Games, All Defensive 1st team selections, and All-NBA 1st teams. In fact, Bryant tied Karl Malone for most 1st team All-NBA selections this season when he picked up his 11th such honor.

Additionally, Duncan’s teams have won at least 50 games in every season of his career except the lockout-shortened 1998-99 season (50 regular season games total), which was the season he won his first NBA title and NBA Finals MVP.

As far as playoff success goes, Bryant has won one more title than Duncan. However, Duncan is currently undefeated in the NBA Finals (4-0) and has one more Finals MVP trophy to his credit.

Advanced metrics also slightly favor Duncan. Duncan has 184.2 career win shares (an estimate of the number of wins a player contributes to his team based on his offense and defense), over 10 more win shares than Bryant does for his career. The Spurs stalwart ranks ninth in win shares all time whereas Bryant is ranked 17th.