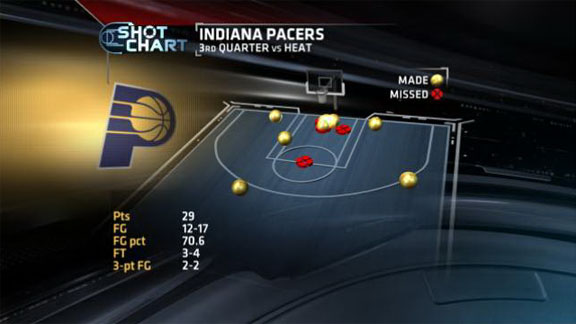 The Pacers shot lights-out in the third quarter ... 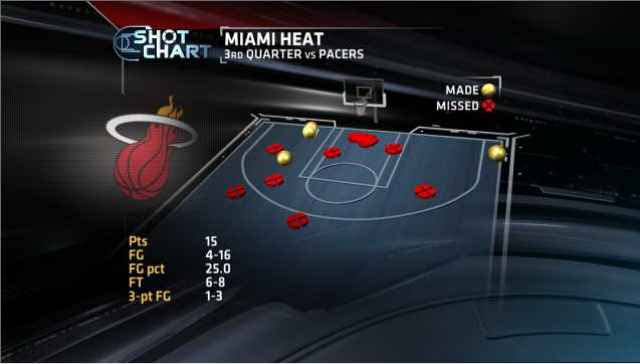 And the Heat could not match them.

The Miami Heat had won each of their previous six games when they had a chance to close out a postseason series. But they couldn’t get that lucky seventh, falling to the Indiana Pacers in Game 6 of the Eastern Conference Finals.

LeBron James did not get much help from his teammates in this one, save for a couple of late 3-pointers by Mike Miller. The Pacers got plenty of contributions, most notably from Paul George and Roy Hibbert. They also held the Heat to 36 percent shooting from the field, Miami's worst field-goal percentage in any game this season.

Game 7 will be Monday night in Miami, but before we get to that, let’s run through some of the statistical highlights in Game 6.

Difference in the Game: Third Quarter

The shot chart atop this story and the graphic on the right tell the story pretty well.

The Pacers dominated in the paint, outscoring the Heat 16-0 within the paint in those 12 minutes. They outscored the Heat by 22 points in the paint for the game, Miami's worst paint-points differential this postseason.

James did not score in the pivotal period until scoring six points in the final 93 seconds of the quarter.

Indiana’s starting frontcourt dominated the game, outscoring the Heat frountcourt 63-34 (with 29 of those 34 coming from James).

Chris Bosh scored only five points for the Heat, his lowest scoring total in any postseason game.

Elias noted that the 15 combined points by Dwyane Wade and Bosh are the fewest for the two of them in a game together since becoming teammates (regular season or postseason).

Hibbert surpassed 20 points for the fifth straight game, but made a big impact on defense too.

The Heat only made nine field goals inside of five feet, their second-fewest in a game so far this season. The only other time they made fewer field goals from this distance was on January 8, also versus the Pacers.

This will be the second Game 7 of this postseason. The road team (Chicago Bulls) won the last one, but home teams have a significant edge in Game 7s, winning 89 of 112 (79.5 percent).

The Heat are 3-2 all-time in home Game 7s, including a win vs the Celtics in last year's Eastern Conference Finals

This will be James' fourth career Game 7. His teams are 1-2 in those winner-take-all games, losing two on the road with the Cavaliers before winning at home against the Celtics last season to advance to the NBA Finals.

James is averaging 34.3 points in those three Game 7s. Elias notes that he has the highest Game 7 scoring average in NBA history, for those who played in multiple Game 7s.