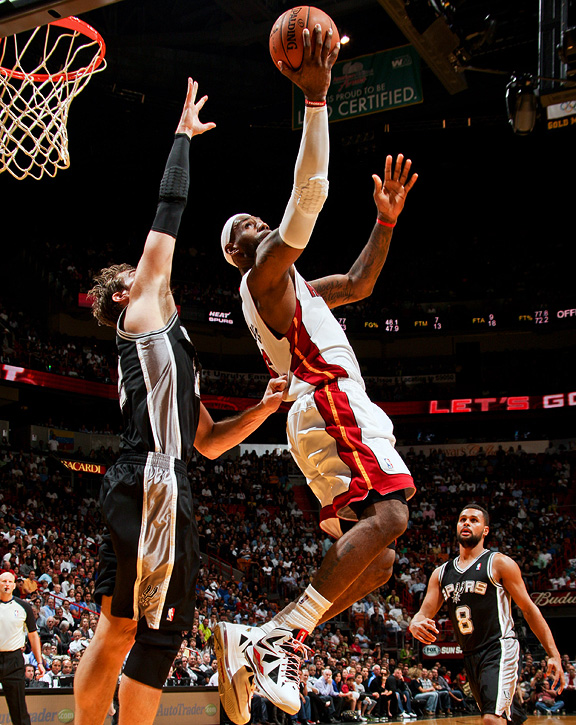 Where big Roy Hibbert caused them a ton of trouble.

For long stretches against the Pacers, Miami couldn't get much of anything done in the paint, at either end -- hardly any layups or dunks, precious few rebounds. The Heat even had trouble stirring up turnovers, which are the lifeblood of their tenacious transition game. In addition, with Hibbert and David West on paint patrol on defense, the Pacers' wings could stay close to the Heat's 3-point shooters, dulling the second sharp point of Miami's offensive attack.

"Roy Hibbert" is the new and maybe only playbook for threatening the Heat's dominance.

And very few teams have anything like him. Hibbert is not just one of the NBA's tallest players at 7-foot-2, but also has difference-making, newfound athleticism and durability.

The Spurs, though, are one of the few teams who can compete with size, offering 6-11 Tim Duncan and 6-11 Tiago Splitter who, let's not forget, only recently frustrated the talented Grizzlies big men right out of the playoffs by stifling just about everything they wanted to do.

Maybe, in other words, you can feel the league thinking that the Spurs can frustrate the Heat in the manner the Pacers did: with size.

There's only one Roy Hibbert

Here's the trouble: Hibbert isn't merely big. He is also, for reasons that aren't entirely clear, particularly intimidating to the Heat's stars, especially LeBron. James' unwillingness to attack Hibbert off the dribble gummed up one Heat possession after another, leading to short-clock situations, contested midrange jumpers and turnovers.

Hibbert is so in James' head that the MVP has a special shot -- the floater -- which he saves only for use over Hibbert. It's not one of James' most effective or favorite shots, which is why he shelves it most of the season. Against non-Hibbert opponents, layups and dunks are preferable.

When James and Dwyane Wade decided to attack Hibbert in the East finals, which didn't happen with any regularity until Game 7, Hibbert had foul trouble and the Heat had a blowout win.

The Spurs have big players in the paint -- that's a fact. Duncan is a legendarily talented defender, and Splitter is amazingly strong and quick for his size. But there's no reason to believe Duncan and Splitter can do anything to play the mental tricks on the Heat that Hibbert did. The Spurs are good at protecting the rim. But Hibbert is the best.

In a groundbreaking paper on protecting the paint presented in March, Kirk Goldsberry and Eric Weiss used SportVU optical tracking data to show that Hibbert held opponents shooting at close range to 38 percent, a number so eye-popping it led the entire NBA. Duncan and Splitter ranked 15th and 23rd, respectively, both letting opponents score about 48 percent of the time -- which is respectable but in a whole 'nother area code than what Hibbert did.

And it wasn't just about making them miss, it was also about keeping them from even trying. And there Hibbert was far more effective than the Spurs' bigs, ranking 12th, compared to Duncan's 28th and Splitter's 32nd. And again, this paper was published in March, before the best part of Hibbert's season.

In other words, the Pacers had one of the very best in the business at both deterring drives and forcing misses at the rim, while the Spurs are good.

Back on the rim attack: LeBron James

When it comes to keeping James from driving effectively, "good" interior defense has never been good enough. Assume James is back in business as a rim-attacking dunker. Typically, James scores more points at the rim than anybody. That guy was missing in action for six games against the Pacers, but he returned in Game 7 and there's no reason to suspect the normal rim-attacking James won't be fully present in the Finals.

When the Heat were down seven with about five minutes left in a November win over the short-handed Spurs, James didn't hesitate to take it right at Splitter, scoring a layup in the play in the photograph above. James did it again a few minutes later. Splitter doesn't inspire LeBron's timidity like Hibbert does.

That doesn't mean the Heat will win, but it does mean that whatever the Hibbert effect is, the Spurs are like every non-Pacers team in not having it. Major inhibition to attack the rim isn't a noted part of James' game against anyone except Hibbert.

The Spurs' big front line could still be a major factor, however.

The teams faced each other twice this year, and it's tempting to discard both as precedent for the Finals, because the Spurs sat Tim Duncan, Tony Parker, Manu Ginobili and Danny Green when they played in Miami. In evident retaliation, the Heat sat James, Wade and Mario Chalmers for the rematch in San Antonio.

So, ostensibly, the regular season tells us little about the Finals. Except, interestingly, the Spurs almost beat the Heat in Miami when the Spurs stars sat. San Antonio took and made lots of shots at the most efficient spots -- at the rim and from the 3-point line. They did that largely with a pick-and-roll approach that would work even better with Parker running the show.

Those layups came mostly from challenging Chris Bosh -- who often plays center -- as a rim protector. In a typical sequence, Bosh would guard Splitter. Splitter would set a ball screen, roll to the hoop, catch a pass, and look enormous in making layups over the trailing Bosh and helping defenders like James, who scrambled in vain to stop the layup line.

When the Heat adjusted the coverage to slow Splitter, Spurs ball handlers like Nando de Colo got into the paint and made layups instead. You can see how this could be effective with Duncan and Parker in uniform.

The Heat, other than using their athleticism and active hands to create turnovers, never really figured out how to keep the Spurs' efficient teamwork from creating quality scoring opportunities. And that's how size could matter in this series -- not from replicating the Pacers' approach of getting in James' head.