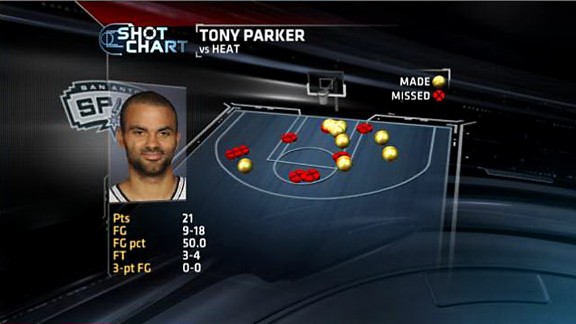 Tony Parker came up clutch for the Spurs in Game 1 ... 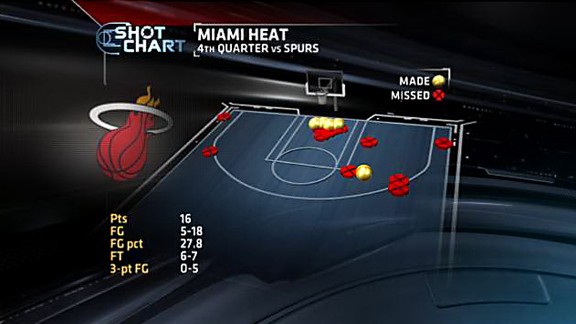 And the Heat were off-the-mark in the fourth quarter. The steadiness of the San Antonio Spurs won out in Game 1.

Their fourth-quarter rally and defensive stand powered them to a victory over the Miami Heat in the NBA Finals. The veteran play of Tony Parker and Tim Duncan proved to be the biggest factors in this victory. Let's run through the highlights.

Parker was 2-for-4 on contested jumpers in the final 3:30, including a shot-clock beating jumper with 5.2 seconds remaining to clinch the win.

Prior to that stretch, Parker was 0-for-3 on the contested jumpers, and the Spurs were 4-for-25 as a team. They finished 6-for-30, but Parker’s beat the-shot clock make in the final seconds was the biggest of the game.

Parker made 3-of-5 mid-range jumpers in the game. He’s shooting 46 percent on mid-range 2s this postseason. His career average on those shots is only 39 percent.

Spurs knocked on the door all night, finally broke through

The Heat took a 21-19 lead with 2:47 left in the first quarter and held that advantage for most of the rest of the game.

The Spurs missed 12 straight shots that would have tied or taken the lead, but finally broke through, going ahead briefly on a Parker free throw with 7:47 left in that game, then getting a Kawhi Leonard putback with seven minutes remaining that sparked an 8-1 run.

The 37-year-old Duncan finished with 20 points and 14 rebounds. Only one player older than Duncan has had a 20-point 14 rebound game in the NBA Finals—Kareem Abdul-Jabbar- who did so at age 38 twice in three days in 1985.

LeBron James had 18 points, 18 rebounds, and 10 assists. His 10 playoff triple-doubles are tied for the third-most all-time with Larry Bird and Rajon Rondo. Only Magic Johnson (30) and Jason Kidd (11) have more.

This was James’ third career triple-double in the NBA Finals. That ranks second-most all-time, trailing only Johnson’s eight.

The Elias Sports Bureau notes that James is also the third player to have a triple-double in consecutive NBA Finals Games (he had one in Game 5 of last year’s Finals), joining Wilt Chamberlain (1967) and Johnson (1984).

The last player prior to James to reach those numbers in a playoff loss was Billy Cunningham for the 1971 76ers.

Lastly: This is the third time in the last 20 seasons that a player had a triple-double in an NBA Finals loss. Two of those were by LeBron James (one in 2011, one this season). The other was by Jason Kidd in 2002.

The one player able to stop James was Kawhi Leonard. James was 2-for-8 shooting against him, 5-for-8 against everyone else.

The Heat have been down 1-0 in a playoff series four times in the James/Bosh/Wade era. In each of the other three instances, the Heat swept the next four games, including last year’s NBA Finals against the Oklahoma City Thunder.