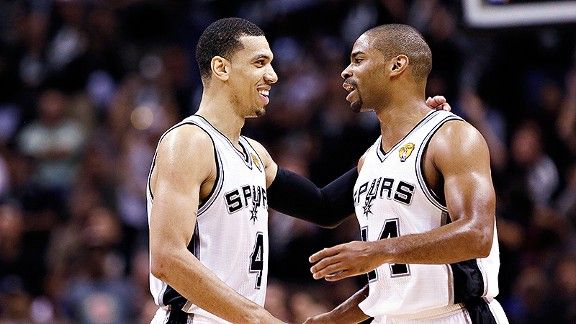 Danny Green (left) and Gary Neal both broke a franchise record in the Spurs' big win.The San Antonio Spurs rode the performance of their big three to a dominating win over the Miami Heat in Game 3. their 36-point victory is the third-largest margin in NBA Finals history and the second-largest in Spurs postseason history.

As a team, the Spurs' 16 3-pointers are a new NBA Finals record.

Battle of big threes in Game 3

The big three came through for San Antonio, but it might not be the names you’re accustomed to.

Green, Neal and Kawhi Leonard combined to score 65 points on 50 percent shooting, including 15-for-22 from 3-point range.

The Spurs' typical big three of Tim Duncan, Tony Parker and Manu Ginobili combined for just 25 points, but Duncan pulled down 14 rebounds and the latter two combined for 14 assists.

Green has scored 56 points in this series to lead all players, six more than LeBron James and 15 more than any of his teammates.

Key to the Game: Spurs shut down the pick-and-roll

Defensively, the Spurs bottled up the James-Mario Chalmers pick-and-roll. In Game 2, the Heat shot 7-for-9 with no turnovers off that pick-and-roll combo, but in Game 3 it netted them no field-goal attempts and three turnovers.

James has been held under 20 points in all three games in the series, only the second time that’s happened to him in his career (he’s played 134 playoff games). The other time it happened was in Games 3-5 of the 2011 NBA Finals against the Dallas Mavericks, the only postseason series Miami has lost since James joined the team.

He was -32 in this game, the worst plus/minus of his NBA career. He’s played three NBA Finals games in San Antonio (two with Cleveland in 2007), posting a negative plus/minus in all three games and shooting 34.5 percent in the three games combined.

Stat of the Night

The Spurs have played 25 NBA Finals games in franchise history and have yet to trail in the series. According to the Elias Sports Bureau, that’s the most NBA Finals games played before trailing in NBA history.