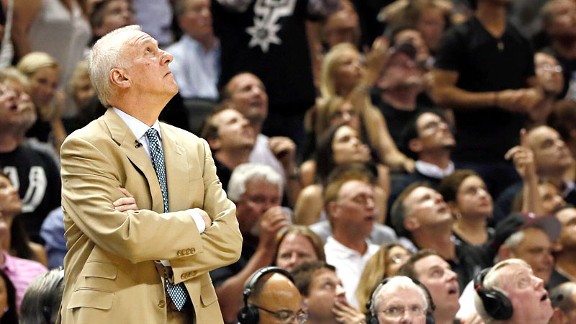 If anyone tells you they know who'll win, they're lying. It's guesswork, even for Gregg Popovich.You're going to hear a lot about what it's going to take to win this championship, which will be deliciously -- for NBA fans -- decided on the court in the days to come.

You know the storylines: LeBron James needs to be aggressive, Dwyane Wade must not take possessions off, Manu Ginobili and Tim Duncan must play like they're five years younger. And Danny Green simply needs to keep it up.

It's all guesswork, though, and like most guesswork, most of it will probably be wrong.

For one thing, typical analysis ignores a ton of things we know really matter. Not fun stuff like Green's shooting or LeBron's psyche, but more process stuff like how unified five defenders are, the quality of screens and angles of dribble drives, who wins the off-ball Duncan versus Chris Bosh wrestle-off.

But the real reason analysis usually misses in predicting a game's key factors is that the game simply does not give a hoot. There are hundreds of factors, indeed thousands of tiny moments, that make up any one win. And the game simply doesn't care if those moments fit trends or not. You can win any old way, and a lot of them have nothing to do with coaching adjustments, "seizing the moment" or anything else.

Think of it as if you're saving up for a vacation. You might put a little something aside paycheck after paycheck. Maybe you'll get a big tax return, or a bonus, and dedicate the windfall to the project. Who knows, maybe you're a hell of a poker player. The goal, though, is the vacation. The bill is the same no matter how you save. And the people at the resort are beyond agnostic about how you built up the funds. All they care about is that, out of the thousand ways to save, you saved enough.

Basketball is similar, in that there are a thousand ways to win and it has no special prizes for people who get there a special way. Already in these Finals, we've seen that with two great teams playing each other almost to a standstill, one good quarter of suffocating defense can get you a win. Shooting way above your average from distance can do it, as can the resurgence of an aging Argentinean. Starting Mike Miller can do wonders, or not.

We like to tell ourselves that the things that matter most are things we, as humans, can control. We could afford this vacation because of our diligence. The Spurs won because Gregg Popovich started Manu. As if coaching decisions were the only thing keeping Game 5 from being a carbon copy of Game 4.

But let's be honest, these two teams could play 100 times with no "adjustments" and produce 100 wildly different games, because life's just that varied, and there are degrees of chance and opportunity in every atom. People can afford vacations because they save, but also by being lucky enough not to have a horrible storm streak through town, ripping everything, including vacation funds, to shreds. Others holiday on the strength of an inheritance or other found money.

A lot of basketball wins, including, potentially, the decisive win of these Finals, come because of crazy stuff nobody could have foreseen. People fall over, referees miss things, balls go out of bounds off the legs of well-meaning world champions, great shooters have off nights or electric ones. None of it's from the game plan, but all of it decides games all the time.

We don't hear about it much, though, because nobody values an analyst whose conclusion is "anything can happen."

Meanwhile, that's not to say there's no such thing as strategy. Of course there is. Popovich and the Spurs really do have a brilliant scheme to find open shots, and open shots really do go in more often on average -- just like saving money from every paycheck is the most reliable way to pay for your trip. Did you notice LeBron saying he hasn't been sleeping? Sleep researchers would say that's absolutely the kind of thing that could diminish his mental acuity. I'm sure Erik Spoelstra would be better off giving minutes to Mike Miller or Udonis Haslem or Chris Andersen (but I don't know which one -- that's why he gets the big bucks).

But the strategy part of it, the stuff that humans can consciously decide to do, in advance -- that's a smaller part of what wins than almost anyone involved would like to admit. All these titans of hoops are on some level powerless, floating on a sea of random chance. We're arguing about the comparative quality of their rowboats and how fast they can row.