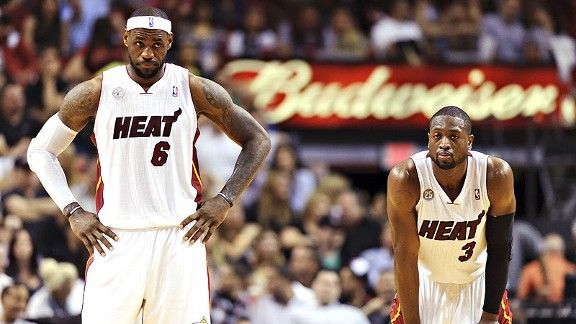 The LeBron-Wade combo has not been working for the Heat in the NBA Finals.Fifteen down, one to go. Both the Miami Heat and San Antonio Spurs have 15 victories this postseason but in order to win a NBA title, you need to reach that win number 16.

We’ve already taken you through the historical storylines and the coaching adjustments made so far in the first six games.

Now let’s take a closer look at the question that has everyone buzzing after LeBron James took over in the fourth quarter of Game 6 with Dwyane Wade on the bench:

Should Miami should play LeBron and Wade separately?

James was more aggressive without Wade on the court on Tuesday night, with seven of his nine field goal attempts coming inside five feet, a trend that has been present the entire NBA Finals.

As you can see in the chart to the right, James is scoring much more efficiently with Wade on the bench, especially on shots close to the basket.

However, in the 194 minutes played this series with LeBron and Wade both on the court, the Heat have been outscored by 56 points.

No other two-man tandem on the Heat has been outscored by more points in this series than the James-Wade combo.

To be fair, Wade has had similar success without LeBron James. Wade has shot 63 percent from the floor without James in the NBA Finals, compared to 44 percent with James on the floor.

Another key difference for LeBron without Wade is how the Heat have performed off his drives.

In the second quarter of Game 6, LeBron drove to the basket and Danny Green, who was playing off Wade at the three-point line, was able to stop LeBron and block his shot near the basket.

Then late in the fourth quarter with Wade on the bench and three shooters plus Chris Bosh on the floor, James was isolated on Boris Diaw and blew by him on a driving layup to the basket with no help from the other Spurs’ defenders.

During the regular season the Heat outscored its opponents by 14 points per 48 minutes with both Wade and James on the court together, but that chemistry doesn’t seem to be working against the Spurs.

Will Erik Spoelstra make yet another coaching move in this back-and-forth NBA Finals to keep Wade and James on the court at different times in Game 7?