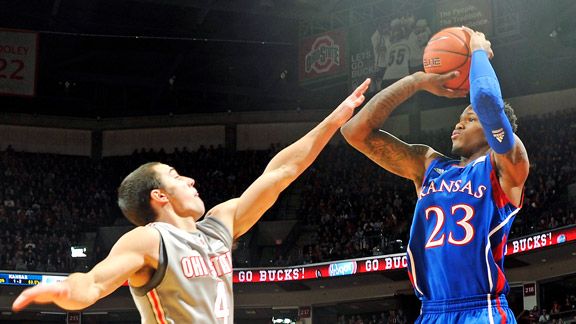 McLemore is efficient on both ends of the court and was extremely valuable to the Jayhawks last season. He led Division I freshmen in win shares -- a metric that estimates the number of wins contributed by a player due to his offense and defense.

On offense, McLemore ranked seventh in points per play among the 220 players with at least 500 plays last season. Seth Curry was the only player invited to the 2013 draft combine who ranked higher.

Perhaps more impressive, McLemore’s 1.09 points per play was the highest average by a freshman with at least 500 plays since Michael Beasley and Kevin Love in 2007-08.

McLemore scored in a variety of ways at Kansas. He shot 48 percent on spot-up plays, 57 percent in transition and 60 percent in isolation.

His jump shot is perhaps his best attribute and one reason he's been compared to Ray Allen. McLemore shot 40 percent on jump shots last season, including 43 percent on catch-and-shoot jumpers. Both stats ranked in the top 15 percentile last season.

What about performing in clutch time? In the final five minutes of the second half and overtime with the score within five points, McLemore averaged 1.45 points per play, the most among all draft prospects with more than 10 plays, and shot 67 percent from the floor.

He most notably showed off his clutch shot-making ability in a game against Iowa State, when he made a game-tying 3-pointer to send the game into overtime and carried his team to a victory with 33 points on 10-of-12 shooting, including 6-for-6 on 3-point attempts.

Everyone knows about McLemore’s potential as a scoring guard, but there isn’t nearly as much talk about his defense.

Victor Oladipo is another shooting guard thought to be near the top of NBA draft boards, and although he is known as a ferocious defender, McLemore was the better on-ball defender last season, according to Synergy.

And finally, McLemore defended well in clutch time, holding opponents to 25 percent shooting, including 0-for-6 on 3-pointers.

So when looking at McLemore, remember that he's more than just a jump shooter. He displayed the entire package in his lone season in college.