For a team based in a city so associated with flash and superficiality, the Lakers seem almost anachronistic. The jersey and the logo remain virtually unchanged since the franchise first arrived in 1960. Upper management often relies on the brute force of negotiation and the art of the deal rather than any deep belief in the draft or analytics. The cartoonish crooning of Randy Newman still booms over the Staples Center speakers before and after games.

The weather and the celebrity culture and the sheer number of bodies in Los Angeles indeed raise the profile, but the Lakers have been more successful than almost every franchise in sports, and that tradition and consistency are ultimately what drive the constant hubbub that hovers around them -- the outside interest in their palace’s intrigue, the anointing of their best players, the outsized expectations both from fans and around the league, their place at the top of a vast majority of players’ wish lists.

So to see the media blitz the team is employing to persuade Dwight Howard into staying put, with billboards and full-page ads and hashtags and confusing photoshops, is both surprising and incongruent. Even more so than the Celtics, a franchise with one more title overall but with seven fewer championships and 10 fewer winning seasons since the NBA-ABA merger, the Lakers represent high society in the league, and it’s not often you see old money getting its hands dirty.

Veteran Lakers watchers can’t recall anything like this. Not even for Kobe Bryant, who had built up eight years of good faith when his petulance threatened to undermine the club’s high hand in 2004. For them, the Dwight campaign brings out the worst in both parties: in the Lakers, for being reduced to equal footing, and in Howard, for being the type of guy who focuses on the bright lights and misses the big picture. 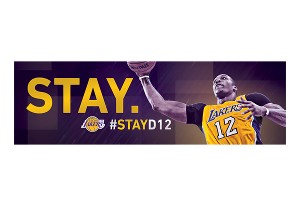 This image can be seen on a billboard on Hollywood Boulevard and is part of the Lakers' campaign to lure Dwight Howard back to the team in free agency.

While the flashy display of affection has been scoffed at for its supposed desperation, it at least represents a more modern method of solving a more modern problem. The league’s new collective bargaining agreement allows the Lakers to offer Howard more money than any other team, but buying a contender to put around him isn’t as easy, especially given how messy L.A.’s books are until next summer. That extra $30 million in salary they can provide is indeed a major sweetener, but outside of that, the Lakers’ sales pitch to Dwight isn’t too dissimilar to the one the Knicks employed when courting LeBron James in the summer of 2010: cap space to pair him with a high-quality running mate (in the Lakers’ case, not until the following season), a chance to live in one of the country’s most popular metropolitan cities, greater domestic marketing opportunities and the chance to be a part of their rich history. In other words, everything other than what we want our superstars to prioritize: the best shot at winning a championship.

If the Lakers seem desperate maybe it’s because they should be. Over the past three years, the power has, rather refreshingly, shifted somewhat toward superstar players. The more popular locales will likely always win out for their services over the Charlottes and the Milwaukees, but for the league’s elite players, future potential, not past success, could mark the necessary difference among them, even if it means forsaking one of the league’s oligarchies. The mission of the majority on the owners’ side of the CBA negotiating table was to make the league fairer for all, and while that will probably always be a pipe dream, it at least made it fairer for some. Particularly so for the smart among the some.

Less than two years ago, the Clippers were able to dig themselves out of decades of futility by leveraging the Los Angeles market, the potential of Blake Griffin and sound drafting to land Chris Paul. Soon after, posters of Griffin, Paul and DeAndre Jordan were plastered on three successive multistory buildings downtown, not far away from the "#StayD12" poster currently occupying a wall of Staples Center.

"It's a sign of the future landscape," general manager Mitch Kupchak told reporters Thursday in regard to the billboards.

Whether or not Howard follows them remains to be seen. Current reports indicate that title chances will be the most important criterion in his decision, but the notorious flip-flopper has said all the right things many times before, only to lose sight of them when immediate gains aren't realized. He helped Otis Smith drive the Magic into the ground by doubling down on high-priced goofballs, then asked out soon after opting back in. He bought into being Bryant’s No. 2 despite initial skepticism, but he only seemed happy and productive at the end of his first season, when the offense flowed around his post touches and Bryant was away from the team.

Because of that, Howard’s image, the part of his career he has tried so very hard to protect, to the point of suffocation, can’t win regardless of what he chooses. If he returns to the Lakers, he again will be subject to the Los Angeles media crunch, for a season that figures to be even more difficult than his tumultuous first one. If he goes to the Rockets, he’ll have flipped (or flopped?) to his third team in as many seasons.

It’s more clear-cut when it comes to future earnings: Houston, after shrewdly compiling assets and shedding salary to acquire frontline talent like James Harden, offers the best chance to win, and to win now; Los Angeles, after muscling its way to a deal for Dwight a year ago, offers the best in literal earnings and all the social benefits from not only being the “The Guy” on the Lakers, but also being the guy for which the Lakers were willing to bend over backward.

I guess we'll see where the signs ultimately point.