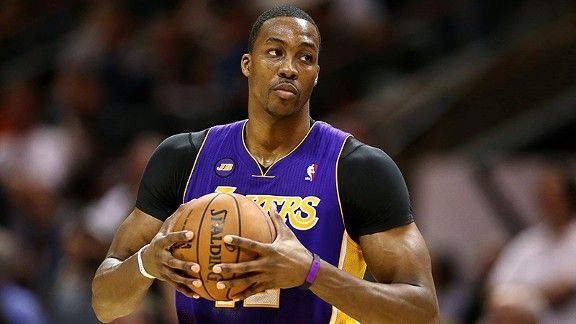 The fourth in a series of blog posts looking at Dwight Howard's statistical fit on the teams he’s most likely to sign with.

The Golden State Warriors got nothing offensively out of the center position last season. In fact, the 3.7 points per game they averaged from starting centers was the fewest of any team in the NBA.

Howard’s biggest boost to the offense would be to the interior scoring. The Warriors' 38.3 points in the paint per game were the fifth-fewest in the NBA last season. Howard alone averaged 12.1 paint points per game, trailing only LeBron James (12.8).

Howard has the potential to open up even more threes for Golden State’s shooters. During Howard’s time in Orlando (2004-11), only two teams shot a higher 3-point percentage, perhaps the result of more open looks due to his presence.

The Warriors were one of the best rebounding teams last season, averaging the second-most rebounds per game. Howard has led the league in rebounding five of the last six seasons.

If Howard chose to join the Warriors, he would be surrounded by a team that complements his talents very well. When Howard led the Magic to the Finals in 2009, the offense ran through him while 3-point shooters surrounded him on the outside.

The Warriors boast Stephen Curry and Klay Thompson, a duo that combined last season for the most three-point field goals made by any pair of teammates in NBA history (483), according to the Elias Sports Bureau. Curry alone set the NBA single-season record for threes by a player with 272.

There is also the potential addition of Howard to a frontcourt that already includes David Lee, the only player in the NBA with more double-doubles than Howard last season.

Howard could be the missing piece that gets Golden State over the top because of the way the Warriors complement his offensive game, and the way he could improve their defense.

For more on Howard fits with other teams: