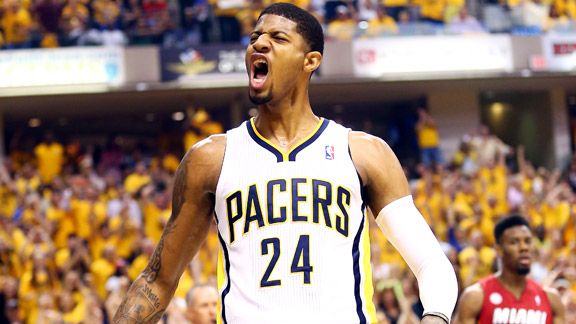 Paul George has been linked with the Lakers, but the Pacers forward may not make it to free agency.

He knows that edgy Lakers fans, already suggesting moves their team should make in the summer of 2014 with fistfuls of salary-cap space in the wake of Dwight Howard's departure, are lobbying L.A. to throw a max offer at George when he becomes a restricted free agent on July 1, 2014.

Only two problems with that fantasy.

No. 1: George confirmed Monday after Team USA's first practice of the summer on the campus of UNLV that his representatives and the Pacers have already opened discussions on a contract extension that could well prevent Indiana's All-Star swingman from ever reaching free agency ... even the restricted variety.

No. 2: George might have grown up worshiping Kobe Bryant, but he sounds like he's working for the Indianapolis Chamber of Commerce when someone brings up his future with the Pacers.

Asked Monday if he's been following all the lobbying in Lakerland, George told ESPN.com: "I'm happy, man. I'm happy in Indiana. It's overwhelming (to hear) that they would want a player like me to come play for their team. But right now I'm focused on Indiana. I'm happy to be in Indiana. Our future is bright in Indiana. I wouldn't want to leave something great."

The Laker chatter about George was inevitable after Howard bolted for Houston, given that the 23-year-old grew up in the Antelope Valley region of Southern California, recently purchased an offseason home in the San Fernando Valley and just had a breakout season with the Pacers that makes him one of the most likely participants in this week's 28-man Team USA minicamp to make it all the way onto Mike Krzyzewski's roster for the 2014 World Cup of Basketball in Spain.

But one source close to the process told ESPN.com this week that a max extension with the Pacers -- most likely before the Oct. 31 deadline for extensions for players from the 2010 draft class -- is a "foregone conclusion."

No surprise, then, that Pacers president Larry Bird and general manager Kevin Pritchard were in attendance Monday for the first minicamp practice in Vegas to watch George at work.

Proudly sporting a chain around his neck after practice with engraved confirmation of his All-Star breakthrough in 2013, George said of his hopes to make Coach K's Olympic roster for Brazil in 2016: "I give myself a high chance. I think I'm cut out for the international game."