The Moment is a new ESPN.com basketball series about points in time that reveal a lot about the game. 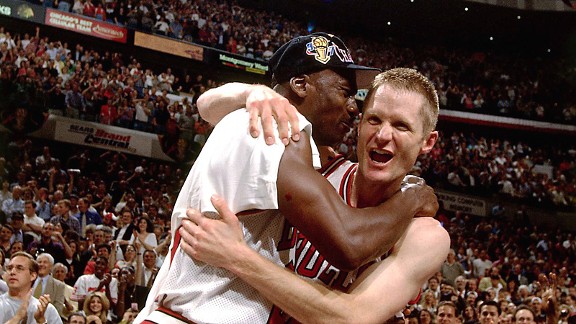 Steve Kerr delivered one of the most improbable punches in NBA history when he hit Michael Jordan.Teammates fight.

They fight like siblings, like roommates, like couples. When you see the same people every day, there’s friction. Sometimes frustration away from the court manifests itself on it. Sometimes tempers flare in the heat of battle. As a player, you know this. You know a little confrontation doesn’t have to mean anything.

“I don’t know what the hell I was thinking,” TNT analyst Steve Kerr says, laughing as he recalls his scrap with the Chicago Bulls legend in the fall of 1995 at Bulls training camp. “It’s Michael Jordan, it’s the greatest player ever, but I was pretty competitive and I kind of played with a chip on my shoulder. I had to or I wouldn’t have made it.”

The two guards were matched up in a scrimmage. It was intense. Jordan had heard the critics after the Bulls’ playoff loss to the Orlando Magic and intended to silence them. He averaged 26.9 points in the final 17 regular-season games after coming out of retirement, but shot only 41 percent from the field. The postseason defeat to the Magic in the conference semifinals, his first series loss since 1990, had some suggesting his best years were behind him. At 32 years old, Jordan was hell-bent on proving otherwise. It was palpable in every drill, every time down the floor.

He and Kerr talked trash on a couple of possessions, and then it escalated.

“I took exception to something he said,” Kerr says. “So I was talking back and I don’t think Michael appreciated that ... and we got in the lane and he gave me a forearm shiver to the chest and I pushed him back. And next thing you know, our teammates were pulling him off of me.”

The 6-foot-3, 175-pound Kerr wound up with a black eye. He threw some punches before it was broken up, too.

“I knew that if we were in an actual fight he could actually probably kill me if he wanted to,” Kerr says. “It was more just I’m going to stand up for myself.”

Kerr and Jordan didn’t have much of a relationship at that point. They’d played together for only two months. Before Jordan left the arena that day, then-Bulls coach Phil Jackson -- who perhaps would have prevented the tiff if he wasn’t in his office doing a media conference call, Kerr suggests -- told the superstar he had to speak with Kerr that night.

Jordan made the call within the hour and apologized. They talked some more at practice the next day and moved on.

As odd as it sounds when you consider that Kerr is the son of intellectuals, someone who was taught that violence is not the preferred method of conflict resolution, he believes that getting into it with his co-worker -- getting into it with Michael Jordan -- was the correct thing to do. He says he was embarrassed by how he was being treated and he wasn’t going to put up with it.

“You can’t run away from a fight,” says Bill Wennington, then Chicago’s backup center and now its radio color commentator. “You gotta protect yourself and defend yourself and Steve did just that.”

“It was a totally different relationship from that point on,” Kerr says.

There was mutual respect, with Kerr feeling that Jordan trusted him on the court more in important situations. In Jackson’s new book, "Eleven Rings," he says the punch was a wake-up call for Jordan and a turning point for the championship-winning 1995-96 Bulls who won 72 regular-season games, a record that will likely never be broken. Who knows what the wake-up call would have been if the fight never took place? Who knows if there even would have been one?

“It made me look at myself, and say, ‘You know what? You’re really being an idiot about this whole process,’” Jordan says in "Eleven Rings." He realized he hadn’t gotten in sync with his new teammates after coming back from his baseball sabbatical.

That was a two-way street. To be a teammate of Jordan, you’d have to accept that he’d push you sometimes. It just usually wasn’t that literal.

During one practice, Wennington blocked Jordan’s shot. After that, Jordan made a point of shooting over him, daring him to try again.

“It became almost his spark of the day,” Wennington says. “He must have come by me five or six more times in scrimmages. I’m guarding Luc [Longley] and I’m isolated in the corner, he drives through the whole lane, comes out to me, and [says], ‘Block this!’”

If you understood those challenges were all about wanting to win, you could enjoy playing with Jordan. Both Kerr and Wennington say they did. Still, relating and connecting to the most famous people on the planet isn’t simple. It was difficult to have normal interactions with Jordan away from the court because of the crowds he’d attract.

“We understood he lived a different life than the rest of us,” says Kerr. “So everyone respected his privacy away from the court and respected the fact that he needed a couple bodyguards on the road with him and that he was going to stay in his suite and play cards and stuff rather than go out. I mean, that’s probably what everybody else would have done, too, given the life that he led.”

There can be tension when one member of a team dwarfs the rest in attention and popularity. Jackson’s job was to diffuse that, to foster a sense of community. That season he also had to integrate Dennis Rodman and his colorful personality, ask Ron Harper to accept a role as a facilitator/stopper, and convince Toni Kukoc to be the sixth man. While this group’s transcendence might seem inevitable now, it was never guaranteed. A different coach might not have been able to manage them, to keep them in tune with each other.

“On a basketball team, you can have this phenomenon where even though you’re together every day, you’re not really communicating,” Kerr says. “And Phil never allowed that to happen.”

The Bulls couldn’t have been great without their immense talent, but they couldn’t have been historic without coming together. Chicago avoided major issues after the Kerr/Jordan incident and never lost more than two games in a row, taking on the characteristics of its coach and its leader. The same relentlessness that produced the training camp tussle led to arguably the best season of all time.

“We had this incredible sense of drive that came from Michael but that permeated through the whole team,” says Kerr.

There’s no easy road map to cohesion for a basketball team. Every locker room has different personalities, every coach different methods. From afar we don’t see what goes on in practices, and we’re unaware of little day-to-day arguments. Great teams don’t completely avoid clashes; they create an environment in which friction can be dealt with. A scuffle doesn’t have to splinter a squad -- it can be a catalyst for forging tighter bonds.

You could see the chemistry in the way those Bulls operated on the floor. In "Eleven Rings," the chapter about the season is titled “Basketball Poetry.” When the triangle offense is flowing, it’s a thing of beauty. Kerr says the team had a “magical dynamic,” that its energy was “incredible to experience.”

That sort of harmony is all too rare. It’s certainly worth fighting for.