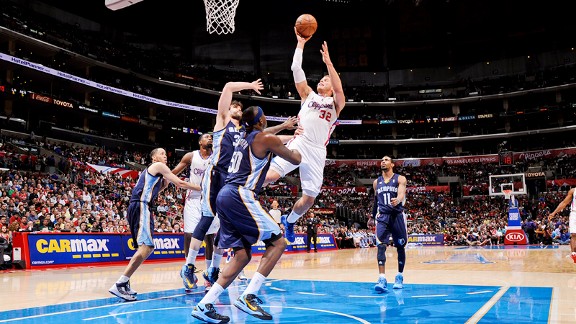 In March, the Clips and Griz unintentionally took part in an exercise: basketball without free throws.

Back in March, during the height of the 2013 playoff chase, the Los Angeles Clippers and Memphis Grizzlies were jockeying for the No. 3 seed in the West. The two teams already loathed one another, their feelings dating to their seven-game series in spring 2012. Things often can get stale in an NBA arena by mid-March, but when the Clippers and Grizzlies hooked up at Staples Center, the buzz was electric.

For the first quarter that night, the NBA was the product at its fullest. The appeal of the game was noted by the Clippers’ broadcast team, along press row and across Twitter. High-grade professional basketball.

The Clippers and Grizzlies are two of the league’s better teams, but neither play in a well-choreographed system that lends itself to hoops ballet. Yet in the first quarter that night, every player on the floor moved with purpose, and crisp decisions were made instantaneously. The ball popped around the floor and the game flowed freely. Oddly, there were no lead changes and the teams combined for only two fast-break possessions. Each team shot greater than 60 percent from the field, but that's not altogether unusual for a single quarter. It was something else:

There were no long red lights where the game came to a stop so we could watch nine guys stand around as one player goes through a rote skills challenge of hitting a standing set shot from a predetermined spot on the floor.

The mandatory timeout following the first stoppage after the 6-minute mark came inside of five minutes. The Clippers took an additional timeout a few minutes later to shuffle the deck after a string of sloppy possessions, but apart from that, the quarter zipped along. Blake Griffin was the best version of Blake Griffin, the big man who can beat you with both refined skills and brute force. Tayshaun Prince hopped into a time machine and beat the Clippers with his handle and down in the post. And after an exhilarating 20 minutes, the game was tied 24-24.

An average NBA game features in the neighborhood of 43 free throw attempts -- 43 buzzkills that send our attention away from one of the greatest stages in the world toward our mobile devices, remote controls, refrigerators and toilets.

… At first field goals counted one point and there were no foul shots; offenders were penalized by temporary removal from the game. Then free throws were introduced as penalties for fouling, including such violations as running with the ball or kicking it. Free throws were shot from 20 feet until 1894-95 when the distance was reduced to 15 feet. The rule-makers tinkered with scoring too, setting the value of a field goal at three points and penalizing fouls by awarding a point to the opponents. Finally, for the 1895-96 season, they settled on two points for a field goal, one for a successful foul shot.

Just to clarify, we stop the action more than 20 times per game because the forefathers of basketball, nearly nine decades before the birth of LeBron James, decided that free throws were a good idea during the infancy of the game, a period during which basketball was far more a recreational endeavor than a spectator event. Entertainment value was the last thing on the minds of these men as they sought to codify basketball's legal system.

More than a century later, the free throw is still central to the game. But apart from timeouts, when the game is essentially suspended for other business, is there a moment during 2 1/2 hours that generates less drama (Ollie be damned), where players demonstrate less of what separates them from us, where the formulaic casts a darker shadow over the spontaneous?

Men like James Naismith and his successor, Luther Gulick, were unquestionably smart and innovative. Basketball wouldn’t have flourished globally if not for their vision and craftsmanship of the game. They realized early on that without a proper disincentive, players would hack each other with impunity. As Peterson documented, rule-makers experimented with awarding a point to a fouled team. If a player was fouled, points were awarded directly and we moved on.

Since basketball’s formative years, leagues have continued to dabble in new ideas surrounding the free throw. In 1950, the NBA instituted a jump ball following free throws to provide a further deterrent to fouling, an idea that was short-lived. Three-to-make-two was introduced in 1954, then eliminated in 1981.

Tradition has played a prominent role in the evolution of the game, but it hasn’t been sacrosanct. That’s a good thing, because tradition shouldn’t act as the sole source of authority, especially for a game whose innovation in rules, style, schemes, form and presentation has propelled its popularity. The 3-point shot was first introduced as an experiment during preseason games in 1978. It’s been an essential ingredient in the league’s renaissance in the past three decades -- from non-existent to arguably the most exciting regular outcome of an NBA possession.

The scourge of the free throw is a far easier problem to diagnose than to treat because there are no simple antidotes. Could we just automatically award two points to a player when he gets fouled in the act of shooting or while his team is in the penalty? One or the other? Maybe two points for a shooting foul, but only one point and possession for a non-shooting foul in the bonus?

We could, as D-League president Dan Reed recently suggested on TrueHoop TV, make every shooting foul one-and-one. That would eliminate first attempts that produce dead balls and another 30 seconds of stasis, though it might also encourage more hacking because there would be an even better chance for opponents to get the ball back at no expense.

And if we did eliminate the free throw altogether, what could we provide in its place that would give trailing teams the opportunity to close the gap during the final few minutes of a game? We could eliminate consecutive timeouts, consequently forcing the leading team to get the ball in bounds on the first attempt. If they can’t -- and we see this all the time -- that would create a change of possession in five riveting seconds as the crowd explodes over a gritty defensive stand (or goes into shock as their team turns the ball over with no time expiring on the clock, all because they couldn’t get it in!).

Free throws are an entrenched feature of the game, so it’s difficult to imagine basketball without them -- but we do have reference points like those 20 minutes in March when the ball was live 60 percent of the time, and like any great piece of visual storytelling, you couldn't take your eyes off the action because you might miss something.

Would basketball be better with fewer (or zero) free throws? You can give us your ideas and talk with us and other fans in the following places:

Thanks to Curtis Harris for his help on the historical material in the post.